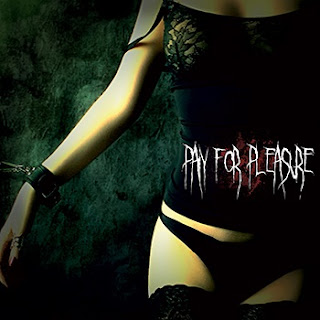 Coming together in 2014, Italian thrash/deathcore fusionists Pay for Pleasure has always centered around multi-instrumentalist Anuar Arebi and a gaggle of other vocalists joining in which makes their music quite frantic and enjoyable. Now finally ready to release the first notes from the project, their self-titled debut is independently released June 18, 2016.

This here is quite an enjoyable and somewhat frantic effort that really relies on it’s death metal structure for the most part. Though interrupted by it’s breakdowns, the bands’s best points are where it’s still focusing on the driving thrash beats while augmented nicely by straightforward death metal patterns. There’s a complexity to those arrangements that makes for a much more appealing time here as it whips through the charging dive-bombing riff-work while offering a solid thrashing blast to the arrangements which aids immensely in their energy. Though somewhat boosted by the chugging riffing patterns, the album’s sudden departures into choppy, breakdown-laden charges here to simply further the deathcore patterns here provide this with some rather off-kilter arrangements here by going for the usual assortment of genre-familiar rhythms and breakdowns to apply for that genre tag which really causes this one to stumble. The elements are just way to separate and disparaging to really gel together into a solid whole that works here, being just way to jangled to really make much of an effort to be coherent as the end result is quite maddening with everything involved here. There’s some solid work here, but it’s somewhat buried under the discordant workings.

While it’s not the most devastating first impression offered here, it’s got more than enough to like here as the elements at play here that do make this a solid, engrossing effort are present enough to make for a rather limited appeal only for deathcore fanatics or fans of the creative principals involved in the project, while others may want to heed caution approaching this one.

Does it sound good? Order it from here:
http://www.payforpleasure.net/
Posted by slayrrr666 at 3:44 PM