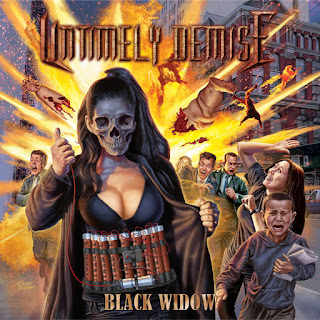 Advancing their style with every release, Canadian thrashers Untimely Demise have certainly advanced quite rapidly towards their chosen style of homaging the German style of old-school thrash while spicing up the pot with plenty of other extreme elements. With powerhouse drummer Bryan Newbury joining the group, the trio prepares it’s third full-length effort was independently released May 28, 2016.

As has been the case for their career, the main element present here is the bands’ celebration and admiration of the German school of thrash as they manage to whip through plenty of frantic and ravenous patterns here that take that to heart.  Full of tight, stylish and heavy thumping patterns that are graced nicely by frantic technical rhythms in their patterns that are far more challenging and complex than anything they’ve done before which adds to the album’s overall sense of dynamic heavy thrashing that is straight from that overall mode of attack. By accompanying these rabid, technical thrashing with an utterly explosive sense of melodic prowess by not only sprinkling in melody-driven soloing and plenty of harmonic accents to the tracks but also managing to add to the driving main rhythm itself there’s such an overall sense of melodic firepower displayed alongside a ravenous full-throttle approach to the tracks here that makes up the majority of the tracks here. It’s such a thumping, heavy-handed approach that treads the fine line between brutalising with it’s attack and overdosing on melodic accents that it hits hard, charges forward with utter impunity and offers the perfect breathing room in their rhythms which is such a devastating impact that it’s simply overpowering on nearly all fronts and becomes a nearly-perfect sonic assault. The only effort that holds this from being utterly perfect is the re-recorded track at the end which features a different drummer, and while being one of the album's highlight tracks originally the change in tone is noticeable and does affect the momentum of the rest of the album. It's so minute, though, that it barely registers against the blistering rest of the album.

With such a powerful and utterly dominating effort that it creates a near-perfect blend of ravenous full-throttle thrash German with plenty of strong melodic accents, they make this an essential release for those into any form of old-school or German thrash in particular, but it’s really hard not to find any thrasher that won’t find something to utterly love here.

Does it sound good? Order it from here:
http://untimelydemise.bandcamp.com/
Posted by slayrrr666 at 6:43 PM