Inquisition (Col) - Bloodshed Across the Empyrean Altar Beyond the Celestial Zenith 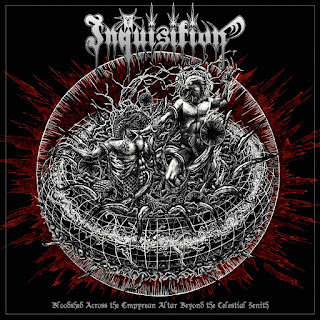 Artist: Inquisition (Col)
Release Title: Bloodshed Across the Empyrean Altar Beyond the Celestial Zenith
Year: 2016
Label: Season of Mist
Genre: Old-School Black Metal
Tracklisting:
1. Intro: The Force Before Darkness
2. From Chaos They Came
3. Wings of Anu
4. Vortex from the Celestial Flying Throne of Storms
5. A Black Aeon Shall Cleanse
6. The Flames of Infinite Blackness Before Creation
7. Mystical Blood
8. Through the Divine Spirit of Satan a Glorious Universe Is Known
9. Bloodshed Across the Empyrean Altar Beyond the Celestial Zenith
10. Power from the Center of the Cosmic Black Spiral
11. A Magnificent Crypt of Stars
12. Outro: The Invocation of the Absolute, the All, the Satan
13. Coda: Hymn to the Cosmic Zenith

Reaching the zenith of their sound, Colombian-by-way-of-Washington black metal legions Inquisition have become one of the more impressive and consistent groups in the genre with a vast, enjoyable discography that always manages to satisfy. With the two-man project offering a slight refining and honing in on their sound, their seventh full-length album was originally released August 26, 2016 on Season of Mist.

As was introduced in their last album, this one again carries a strong celestial vibe to the material while still containing that all-powerful and devastating Inquisition attack. This contains that deep, slow churning tremolo rhythm section with plenty of dynamic weaving through the arrangements to incorporate plenty of ravenous thrashing in the scorching up-tempo sections as well as the explosive dynamics within the tempos to go through these varied compositions with stunning and spectacular ease which creates a slew of prototypically savage tracks in their classic style. Alongside these are efforts which drop the savageness and rely more of a massive, majestic slow-tempoed sprawl throughout the rhythms which forsake the drilling speed for a more calculated, expressive approach that’s given a mood-enhancing boost with the use of the cosmic-styled melody patterns written here which drive them forward with plenty of atmosphere and power. Being able to conjure this variety with the music is simply jaw-dropping in approach and style that the album retains an epic vibe without really being an epic, overlong effort, and makes this one even more impressive with their trademark style being able to fit into the work so easily and effectively as there’s the savage unrelenting old-school attack melded alongside a majestic, celestially-influenced attack that’s epic within a confined soundscape. That allows for a near-flawless attack overall here with only the useless instrumental intro and outros to really be of any complaint to this.

Frankly, this is surely one of the bands’ most masterfully-crafted and enjoyable albums on the whole with barely anything really wrong featured and the power and aggression of their usual material melded alongside the epic melodies working into their sound that this is a must-have record for anyone remotely into black metal or extreme metal in general.

Does it sound good? Order it from here:
https://inquisitionbm.bandcamp.com/album/bloodshed-across-the-empyrean-altar-beyond-the-celestial-zenith
Posted by slayrrr666 at 3:37 PM