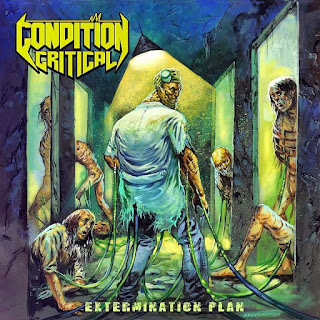 Furthering their approach in the genre, New Jersey thrashers Condition Critical have taken a huge step forward in their intensity and outward approach to the scene which makes them emerge as forerunners of the scene. With a flurry of lineup shuffling during the three-year gap between releases that saw drummer Ryan Donato leave only to return in time for the recordings while guitarists Alonso Maguiño and Sam Agnew got replaced by Tony Barhoum and Ryan Taylor, the groups’ second full-length is self-released March 18, 2016.

As was produced in the first go-round, the band here is exceptionally proficient at providing deep, frenzied riffing and rather intense patterns here in tight, utterly maniac tempos. The album’s loose, off-the-rails intensity featured here is full of explosive energy as the album dives through a series of ravenous, high-velocity riffing that offers a slight progressive touch only in the sense of being able to wallop the listener over the head with their dexterous arrangement changes. This produces a slew of tight, cramped songs beating down with a blistering intensity switching over into different rhythms and breaks constantly in their patterns which is a rather impressive feat at the ability to generate that feverish intensity for a consistent approach throughout here with the deep, churning patterns carrying these intense tracks along the way. That does bring up the slight problem here with this one being just way too compact and same-sounding to b unable to really differentiate the tracks from each other in the running order as the incessant volley of riffing thrown out makes it nearly impossible to catch a breath or even tell what track’s playing, and while that sort of relentless beatdown may appeal to some it does offer a potential problem for some.

Though the band is certainly quite adept and utterly pummeling in their delivery, this sort of tactic might not be a truly universally loved one as those who want some sort of variety in their thrash should heed caution but the overall frantic assault here should be welcomed by anyone looking for intense thrashing or any fans of the revivalist movement as well.

Does it sound good? Order it from here:
http://www.indiemerch.com/conditioncritical
Posted by slayrrr666 at 2:12 PM