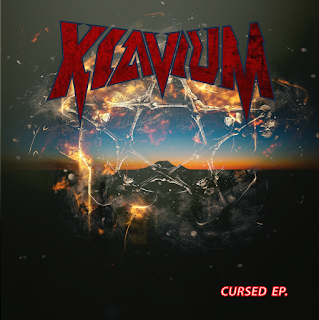 From the unlikely Caribbean islands, Trinidad-and-Tobago thrashers Klavium have endured plenty of line-up hardship over the years as the rotating crop of musicians has left the band without any kind of stability since their formation as Avatar. Now officially rebranded as a two-piece around founding members and brothers Kahdil and Dylan as well as the official name-change, this last EP under the previous moniker was independently released November 2015 before the name-change.

For the most part, this here is pretty simplistic and generally enjoyable old-school inspired thrash that carries plenty of tight, energetic rhythms together alongside the frantic moments featured within here. The different tempos here are rather enjoyable with the group switching nicely between the rabid, crunchy old-school thrash and the more mid-tempo plodding that offers up a vastly-more dynamic approach here with a far more technically-minded approach than the more frantic thrashing as the various rhythm changes are much more apparent than the one-note feverish riff-work. That there is the album’s one lone downfall here as the bands’ clearly more adept at the various tempo changes and rhythm switches in their mid-tempo realm that it makes the faster thrashing seem quite simplistic and unoriginal as it exposes the fact that they’re simply just retreading on the same ground that the majority of revivalist groups are utilizing. While it can work itself into a frenzy quite efficiently, that nothing really original is done with these rhythms does stand-out in this one. As well, the shortened running time is another minor issue here with it not really going on long enough to really get a great feel here as it’s over right when the band was really starting to get going with some of their best tracks, yet that’s always the case with EPs and really doesn’t hold it back all that much.

Though there’s clear learning curves ahead for the group as they progress here, that there’s a solid framework to work with gives this group a promising future with simple fixes to be done that leaves this one easily recommended to less-discernable revivalist aficionados or thrashers looking for this kind of music from unique places.