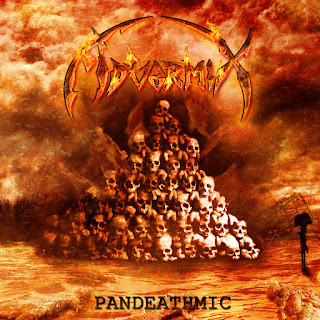 Formed in 2006, Spanish thrashers Advermix have made quite a name for themselves in the Spanish underground metal scene as the disciples of old-school thrash metal have gained in maturity and experience through each of their releases. Following up a series of EP releases and a strong three-way split, the group finally prepares to issue its full-length debut released May 31, 2016 on Born of Chaos Records.

Bristling with fury and intensity, the group unleashes a rather vicious surge of old-school thrash here with plenty of furious and truly frantic rhythms that employ every inch of the traditional thrashing that makes for a wholly crushing and dynamic offering. The fiery, vibrant rhythms featured here generate the kind of explosive energy and hard-hitting crunchy chugging that’s a hallmark of the style and is graced alongside the fine and enjoyable introduction of the album’s more mid-tempo work featured here. This melodic, bouncy series of patterns comes in and gives this a majestic feel with it’s mid-tempo, plodding series of riffing that still offers up that rumbling crunch that keeps this in a firmly old-school thrash design that’s boosted nicely by these melodic features. Though that works nicely, it does make the album quite a bit less interesting as the album is much more fired up and lively when it’s going through the up-tempo style while it tends to drop off in energy and intensity with the melodic accents coming in and not really letting the album go through it’s paces all too greatly. The crunchy patterns are all too short as well, making this one feel way too brief than it really should and the album’s really over just when it feels like it’s starting up. Otherwise, there’s some good work here.

Though it’s not quite as ruthless as it really should with the introduction of the slightly melodic tones that hold it down from it’s true thrashing sections which really stand-out here when they appear and make it worthwhile for old-school fanatics who can appreciate the flaws of this one.

Does it sound good? Order it form here:
http://bornofchaosrecords.bandcamp.com/album/pandeathmic
Posted by slayrrr666 at 6:50 PM