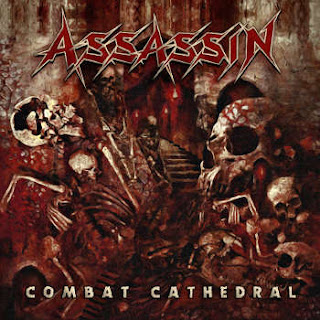 Still one of the scene’s most underappreciated groups, German thrashers Assassin have certainly carved a niche in their scene with plenty of strong releases that has continued throughout their three-decade-plus career. With the four-year gap between releases seeing vocalist Robert Gonnella depart for Ingo “Crowzak” Bajonczak and guitarist Michael Hoffman leaving after recordings to be replaced by Frank Blackfire, the groups’ fifth full-length overall was released May 20th, 2016 on Steamhammer.

As was their style from the beginning, this here was quite the impressive and enjoyable burst of old-school thrash that opts for a strong blend of the Bay Area style and the German breed. The dark, simplistic riffing is a straight-up German style influenced by their homeland, but fuses them with the choppy rhythms and crunchy patterns favored by the Bay Area style which creates a rather intriguing and explosive mix between these two scenes which explores the best virtues of each. Flowing freely with the explosive churning patterns and straightforward riff-work of their German forebearers which carries the intensity and extremity of those acts while still managing to go for the pounding rhythms, dexterity in their rhythms and the type of swarming patterns that comes along with the type of intensity afforded to the band with their Bay Area styled attack. The end result is tight, vicious and thoroughly fiery attack which doesn’t really offer up any real down-points at all in the album, and it’s only dragged down by the fact that it’s a bit bloated here with a few too many songs here. The attack does loose some of it’s luster as it goes on with it’s battering attack, but for the most part this doesn’t affect it all that much.

There’s quite a lot to really dislike with this one which has only a few minor problems stemming from an overabundance of tracks to push the running list past a more suitable length which does offer up more opportunities to get pummeled by their attack which makes this a prime choice for any fan of German or Bay-Area old-school thrash metal.

Does it sound good? Order it from here:
http://www.nuclearblast.de/en/products/tontraeger/cd/cd-digi/assassin-combat-cathedral.html
Posted by slayrrr666 at 3:26 PM