Anthrax - For All Kings 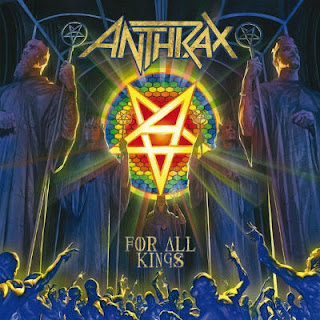 Following the years of tribulations together, New York thrash legends Anthrax have soldiered on despite the constant line-up shuffling and uncertainty to come back recharged, refocused and more intent on providing the type of thrashing material from their heyday. Coming back together with Megaforce Records once again, the groups’ eleventh full-length of original material and first with new guitarist Jonathan Donais was originally released February 26, 2016 after a five-year gap between releases.

Being around for as long as they have, this here is pretty similar to what’s been apart of their sound for the majority of their career which focuses on the tight, melodic twin guitar-based thrashing that’s featured here. The riffing is highly melodic and makes for quite a rousing series of high-energy riffing that’s quite heavy while also bringing along plenty of melodic harmonies in the vocals as well as the strong leads throughout here create a strong sense of surging melody that compliments the varied heavier riffing throughout here. That comes from a selection of pieces that range from hard rock-inspired numbers mixed with some mid-tempo groove to their traditional stomp-style thrashing that raises the energy considerably and even drops the energy level down into a more slower-paced crawl with the addition of ballad-esque numbers that occur here which are also quite evenly mixed into the album as a whole. This is quite a dramatic variety that delivers on a dynamic level quite readily with this one having such a varied yet still contained feel and tone that carries throughout the album as a proper whole which makes for a highly-appealing time here that offers up enough sections from each part of their career that it readily allows for anyone to get into it. The only real breaking point is the ballad which some would claim might not really belong on the album but for the most part it’s still a great listen on the whole.

With plenty of variety to get any fan of any point of their career covered which makes this one of their brightest and most enjoyable releases in their vast catalog and ranks as one of the better releases of the year which makes this an easy choice for fans of the band’s more recent output or the group in general as well as the old-school thrash scene overall.

Does it sound good? Order it from here:
http://anthrax.com/4ak-us-canada-orders/
Posted by slayrrr666 at 4:00 PM