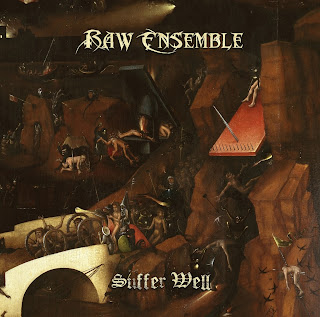 Coming together in 2009, German thrashers Raw Ensemble have started with the attempt of creating old-school thrash metal the way of the original bands with their desire to write and record using the technology of the day. Now four-years since the release of their first demo, the four-piece is ready to release their self-released full-length debut June 18, 2016.

Taking plenty of influences from their main sources, the group offers a rather raw take on the explosive old-school style here as this one has a much more vicious take on the genre. The general riffing is Bay Area through and through with the crunchy patterns and generally dynamic energy created by the vicious up-tempo rhythms and pounding drum-work that adds to the choppy, jagged patterns featured throughout here, which is then given a rather vicious and intense boost with a raw edge to the material that makes for quite a fun time throughout here. This production on the album does end up managing to cause one of the few problems with it, as this gravelly tone here completely obscures the melodic rhythms that are interjected into the album along the way as this gives off a sense of just dropping the tempo down into a mere plodding chug rather than actually attempting to balance it all with minor melodic accents as the riffing drops off into the slower tempos which signals where this is supposed to occur. This isn’t accomplished as effectively as it really could with it generating the kind of ravenous vicious thrashing elsewhere yet stumbling with this other segment of their sound. Likewise, this causes the drumming to come off with a case of being recorded in a rehearsal room such is the simplistic thumping that goes on throughout here really robbing it’s power and instead really only keeping it’s speed and intensity which is part of the rest of the album. Otherwise, this one is quite fun.

Though it has some weak points due to the production job on this one, there’s still a lot to really like with this one in terms of its speed and intensity that gives it quite a lot to really like to hold up over those areas and make this a solid choice for the most devout revival-thrash enthusiast only.

Does it sound good? Order it from here:
http://rawensemble.bandcamp.com/album/suffer-well
Posted by slayrrr666 at 1:23 PM