KZOHH - Trilogy: Burn Out the Remains 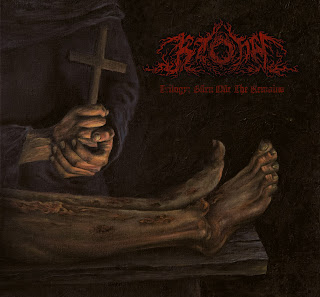 Becoming one of their country’s better exports, Ukrainian black metallers KZOHH have brought a pestilent-style ritualistic approach to the genre as the group has continued on throughout this style throughout their work. A loaded concept album about the history of the flu throughout history, the supergroups’ third album in three years was initially released with a bonus live DVD September 30, 2016 on Ashen Dominion.

For the most part this here is remarkably consistent in that it simply consists of epic arrangements with plenty of long, meditative passages throughout here. That leaves this one with a long, droning nature that’s melded onto the overlong tracks with plenty of exceptionally drawn-out sections that take those meditative elements to the forefront quite easily. There’s little else on display with the minimalist music offering up no real deviation at all here with the album going for that meditative mood for the most part here and the minor elements added into the arrangements which give it a rather heavy Middle-Eastern vibe manage to bring about a slightly different element to it while still engaging in that minimalist, droning meditation-style series of rhythms. It does break out into ravenous blasting black metal at select occurrences that feature those traditional tremolo-picked riffing and energetic rhythms that are featured here, though this one doesn’t put them as much of a priority as others would which tends to make this seem like a rather overlong exercise without much payoff. It’s clearly obvious the traditional black metal segments aren’t the main focus here, but they are the most enjoyable and energetic as the rest of the music comes off as bland background-sounds found in a relaxation spa with a few whispery rasped vocal shouts thrown in and it’s not entirely engaging with the exhaustive lengths found here which makes them even more challenging to get through.

Though this one isn’t all that great at what it does since the specialized nature of their appeal isn’t that dependent on themes and issues relevant to the target audience, this one really leaves the group to appeal mostly to fans of this sort of relaxing meditative chamber music only while more traditional black metal fans should heed caution.