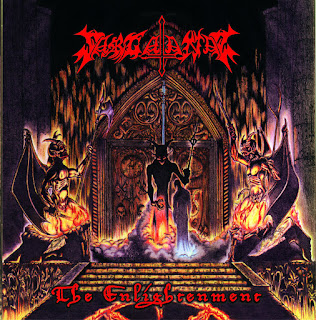 Formed back in 1986, long-running Mexican black/death legends Sargatanas have taken plenty of time to settle on their first professional output as the constant crop of musicians have halted their legacy until the mid-90s when their first demo releases were released. Now finally prepared for their first proper release, the groups’ debut full-length effort was released in 1999 by Conquistador Records before a reissue February 10, 2017 on Old Temple.

Churning out plenty of viciousness, the group display quite a profound and determined understanding of their sound right off the bat on this release. The vast majority of the album contains plenty of slow, lethargic riff-work utterly drowning in old-school tremolo style rhythms, letting this one evoke a truly chilling and darkened atmosphere by droning on through their patterns here. The agonizing patterns, featuring plenty of majestic rhythms and sprawling sections generate the kind of plodding pace that stands out here especially once the album kicks up slightly. These are mainly based on featuring the tremolo riff-work and pounding drum-work in a far more up-tempo and energetic series of patterns that offer a strong dynamic variety against the plodding rhythms here, and with the whole affair completely draped in that raw, churning atmosphere it works so well to its advantage. However, one of the biggest issues here is the fact that this one is just so overlong and bloated that it becomes somewhat of a chore to get through. There comes a point in the later half where it all starts blending into a blur of rather hard-edged but still repetitive tremolo riffing and churning rhythms that sound way too similar to stand-out. Given that this one contains way too many songs for its own good in that format is what ultimately ends up bringing this one down as well since there’s no real reason why it had to be this lengthy and could’ve cut out a few tracks to make it less obvious. Still, for a debut, this isn’t that bad.

While there are way too many repetitive moments here because it’s filled to bursting with too many elements it didn’t need from having so many tracks throughout here, the fact that for the most part it’s still a devastating and dynamic offering makes this a choice look for those that love that raw, old-school black/death metal style.