Loathfinder - The Great Old Ones EP 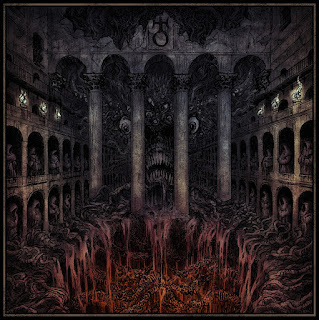 Having formed just recently, Polish black/doom metal newcomers Loathfinder have started up in the guise of finding the most lethal forms of their sound together in one murky, lethargic tone that’s incredibly professional for their first effort. With the band finally able to go for a full-length first offering, the groups’ debut EP was originally self-released April 24, 2017 before a CD reissue four days later on Godz ov War Production.

From the start, this here is obviously a rather strong immersion into this particular brand of elements mixing together from these fields. Lead by sprawling sections with plodding tempo-arrangements that bring deep, swirling riff-work and plenty of long, drawn-out rhythms that offer quite a featured doom influence on the music. This prominence does tend to overwhelm here with the crawling, lurching tracks readily coming upon the more epic soundscapes present in these drawn-out sections that give this a lot of it’s staying power. Added together with those elements is a grand, darkened filth-riddled atmosphere from the vocals that adds a grittiness and darkness which adds an incredibly appealing vibe with the material, adding a nice layer to the churning riffing by making it rather dirty and enhancing the plodding rhythms. Although that does make the tracks run into each other way too much which is to be expected due to the brevity of the release and the fact being this is a debut pressing from the band, neither of these issues really hold this back too much.

Not really featuring too many flaws in terms of the music and featuring plenty that can be overlooked anyway for a variety of factors, this is a strong and polished debut that offers a serious amount of quality material for any fan of blackened doom metal or likes the slower side of extreme metal.


Does it sound good? Order it from here:
https://godzovwarproductions.bandcamp.com/album/the-great-tired-ones
Posted by slayrrr666 at 6:14 PM