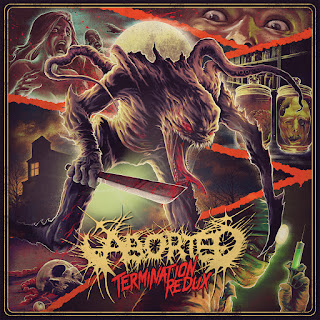 Continuing their reign of slaughter, Belgian brutal death machine Aborted have been on fire ever since they decided to adopt a more ferocious and unrelenting charge into their music nearly a decade ago. To mark the 20th anniversary of the group’s founding, they present this ravenous assault with three new tracks plus a re-recorded bonus effort released January 8th, 2016 on Century Media Records.

For the most part this here is simply just a short, blistering account of the band’s signature sound in celebration of its big anniversary, and in this case, it certainly works quite nicely. The tracks are the usual blistering, short and hyper-frenetic bursts of vomitous-sounding death while managing to add a touch of technicality and mechanical-sounding drum-blasts to simply enhance the chaos. This is accomplished in a short-form manner which works well at showcasing the group’s sound while allowing the significance behind its origins to play out quite well. As a short primer for the upcoming full-length and a special anniversary present for fans, this succeeds exceptionally well while also managing to sound a little short for its own good as if it could’ve gone for more tracks here which is a common complaint about this type of release but doesn’t detract it too much.

With nothing really wrong with it from a technical standpoint and the historical matter behind its release serving as a proper explanation for the brevity of its overall length, this here is a perfectly suitable entry point for fans who are new to the group, longtime fans needing to soothe their appetites between releases or those simply looking for a slice of brutal death metal carnage.