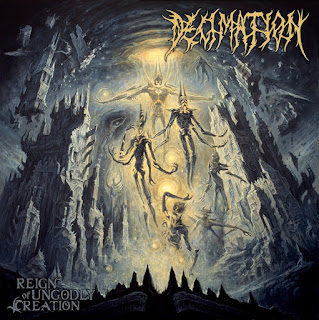 Certainly taking their time between releases, Turkish brutal/technical death metal legends Decimation have continued to hone their skills in between releases with the now four-year gap between efforts resulting in a minor lineup shuffle along the way. Pruning vocalist Egemun Seyhan so guitarist/bassist Erkin Öztürk can now take over vocal duties in the power trio, the group’s third full-length is released December 9, 2014 on Comatose Music.

Like the majority of groups in this genre, there’s a strong reliance here on employing a tight, swirling series of riff-work with plenty of utterly frenzied and dynamic rhythms here, which are played at rather frantic speeds to the point of being blistering battering rams. The complexity of the riffing and bludgeoning rhythms featured here is where this generates the technical formation of their material, featuring enough challenging patterns that there’s plenty to enjoy for the sheer whirlwind of their playing ability alone while generating the kind of tightly-wound, blasting segments to offer an onslaught of brutality. That more brutal-accented part of their sound drives the music moreso than their technicality as this one really whips up that kind frenzied charge here as the dominant aspect of the music oftentimes at the expense of the rest of the track which seems to be the album’s main failing here. This is more concerned with hammering out brutal sections of the arrangements that it really doesn’t do much at all with the rest of the music here and turns it all into a blinding blur of squealing guitars and blasting drumming that is exceptionally competent in its approach yet doesn’t generate the kind of enthusiasm for itself that it really needed to stand out in the scene. This one really could’ve been given a little more change-up in the riffing approach here to at times distinguish what the actual rhythm at play here is really attempting as it’s mostly buried under the sea of blindingly-fast technical riff-work. On the whole, though, it’s the only real issue to be had here.

Though the album somewhat struggles with its identity as there’s little on display here beyond the lightning-fast and competently-played material, that in itself might be enough to make this appeal quite heavily to fans of the brutal or technical realms of death metal or fans looking for more music from that area of the world, while others should heed caution with this release.