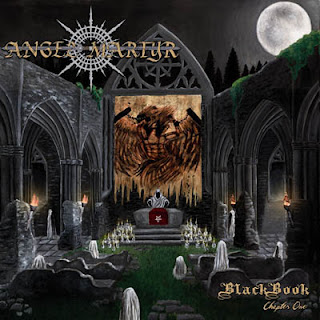 Formed initially back in 2006, Italian heavy/speed metallers Angel Martyr changed to their current moniker from Wraith’sing and set about to forge ahead with their love of old-school heavy metal as the band toured relentlessly honing their attack into a lethal assault. Now finally able to unleash their first official offering, the bands’ full-length debut was released March 17, 2017 on Iron Shield Records.

Taking their cues from the past, the group offers a rather impressive and convincing manner of attack that gives off the tone and feel of the old-school classics. There’s a strong semblance of classic speed metal riff-work throughout here, bouncing along at breakneck tempos that keep this one at a rather engaging pace throughout here which makes for quite a fantastic feeling here. This makes the music light and melodic while allowing for plenty of epic arrangements alongside the tight speed metal sections, working nicely here to make this rather enjoyable and fun as the heavier sections are still displayed prominently alongside the lighter sections that provide the fine melodic accents and furthering the steps into the old-school style. Given that the album does tend to go for the longer, more involved tracks here, that becomes all the more important to give these sections room to breathe and grow as the extended time allows for more arrangements to be included here, although that introduces the one main lowering factor with this one in that there’s just not a whole lot that can be done with how these drag on and feels overlong. The riffing looses a lot of its power noodling along at these extended lengths, the sections get drawn out more than needed and the album tends to slough along until the end which can make for a draining experience. However, being a debut this does get a bit of leeway and doesn’t hold this back all that much.

Though it can get a little bloated and features some rather troubling segments, there’s plenty of highly enjoyable efforts to like with this one’s old-school influenced attack that it should readily appeal to all fans of classic heavy/speed metal or those looking for solid classic metal in general.


Does it sound good? Order it from here:
http://www.ironshieldrecords.de/angel-martyr-2017.html
Posted by slayrrr666 at 3:55 PM