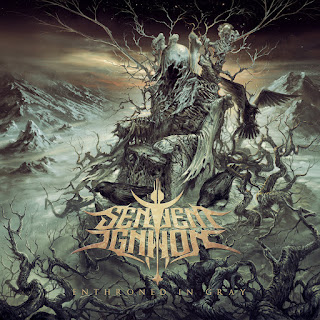 Formed just in the last few years, Bay Area technical/progressive death metallers Sentient Ignition have brought a vast array of influences into a complex, challenging sound which is quite a devastating blow for a band bringing about their first offering. With the band rushing forth to offer their first professional release, the self-released debut full-length was originally released May 1, 2017.

From the beginning notes of this one, there’s a strong display of material here that gives this offering the kind of full-on charge through a progressive landscape. The fact that the vast majority of this one is based on twisting, swirling patterns utilizing challenging riff-patterns that dominate this one quite readily, making for a rather fun time here. These sweeping rhythms are based on the technicality of the riffing which is fantastic in building up dramatic moments through the utterly complex notes hit as well as the bands’ far-more-detailed ability to switch from the varying tempos here with the tight chugging, ravenous gallops and blistering thrash paces all coming to play here while expertly navigating throughout the frantic riffing alongside these tempo changes. That does manage to become quite the album highlight here, especially since there are a few minor flaws here. The biggest issue is the fact that there’s just not a whole lot of tracks to be had here with the album running through just a few tracks after the intro so it does feel rather short in spots as it really could use a few extra tracks to bump this up even though there’s still plenty to enjoy here with the epicness of the tracks as they are. As well, the fact that the guitar-tone on the album does dominate the overall production does make this a lot thinner and not as heavy as it could’ve been as this one doesn’t really pack the kind of punch others in the style accomplish. Still, for a debut offering, this one isn’t too bad and these are definitely fixable issues.

Though this one does tend to come up with a few minor issues, the fact that these are for the most part fixable as the band continues on their career, especially being a debut offering anyway which makes this a potentially intriguing band to follow for anyone into tech/death or progressive music.


Does it sound good? Order it from here:
https://sentientignition.bandcamp.com/album/enthroned-in-gray
Posted by slayrrr666 at 3:52 PM