Hellspawn (Pol) - There Has Never Been a Son of Me 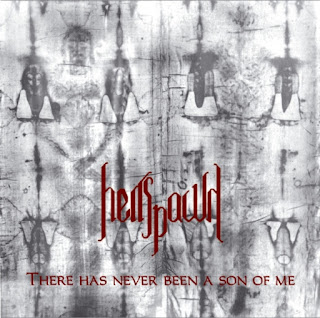 Utterly crushing their old ideals, the Polish death metallers under the name Hellspawn have long sought to offer infernal, blasting hymns that used their full-on, intense assault that has been their trademark since the very beginning of their career. With a four-year gap between releases from the band, their third full-length effort was released March 16, 2016 on Old Temple.

Straight from the beginning, there’s a clear idea of the kind of blistering and charging material on display here that continually gets featured. This one is mostly built around tight, frantic riffing and plenty of swirling tremolo patterns in their display of churning mid-tempo paces throughout here, which gives this one such a frantic and intense attack. Keeping the vast majority of the album in such a mainly up-tempo state lets the tight rhythms and crushing tremolo leads dance around to great effect here as the thick riff-patterns generate the kind of intense energy required. That is successfully balanced out by a thumping mid-tempo style that really brings out the tight rhythms to a greater extent that the quicker, more balanced tracks that are far more prominent on here and bring about the kind of dynamics that really get explored here. Although it gets really enjoyable due to this rather strong attack, the fact that it does tend to get lost in these repetitive riffing patterns and paces does tend to undue some of these positives with the album really becoming quite hard to determine what’s going on with the way it continually evokes the same overall approach on many of the tracks. However frenzied and intense it gets, this one tends to go the same way with its attack and that doesn’t do much for the album. Otherwise, this one doesn’t really have much else wrong with it.

Coming across way too familiar to really let the stellar attack get displayed to it’s fullest potential, the fact that remaining features here are so strong and devastating makes this another strong notch in their belt and gives this a lot of appeal to those who prefer this infernal approach to classic death metal.


Does it sound good? Order it from here:
https://oldtemple.bandcamp.com/album/hellspawn-there-has-never-been-a-son-of-me
Posted by slayrrr666 at 5:52 PM