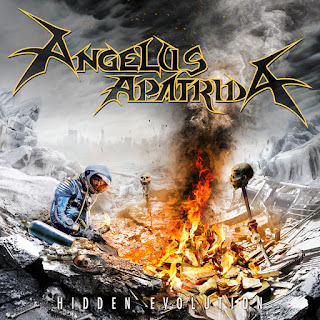 Having broken through the international market, Spanish thrashers Angelus Apatrida have gathered a formidable live reputation on the back of countless touring in their home state and abroad which has honed their razor-sharp thrash to a fine whole. After a three-year gap between releases, the consistent and long-running group prepares its fifth full-length release January 15, 2015 on Century Media Records.

As has been the case for their previous albums, this here is a ripping and furious blast of revival thrash that brings about a rather enjoyable attack throughout here. The fact that this is based on frantic swirling thrash patterns filled with plenty of furious rhythms and a strong adherence to the arrangements of the old-school scene that readily makes for a rather explosive effort here ranging from the blistering full-throttle tempos to the more relaxed and laid-back tempos. This approach is greatly enhanced by the band’s penchant for strong melodic leads woven throughout the main riff-work as well as the dexterous soloing and gives this a rather dynamic balance to counter the strong crunch of their traditional thrashing at the forefront of the bands’ attack. Given that the ravenous thrashing here makes up the majority of the album, those varied approaches are at the forefront of the album’s relentless and intense charge that gets featured strongly here at times, and that makes the melodic interjections all the more impressive and dynamic. Still, it’s the bands’ fiery charge here that makes the most impact even with these melodies sprinkled throughout here, and work incredibly well in giving this a wholly vicious and ravenous attack that gives this one so much to really like. That said, there is a lot to really like here with the album being a bit bloated with tracks a bit too long for their own good, especially in the second half with several epics that could’ve been trimmed down some and not really lost a lot of their impact at all. This, though, is really all that bothers it.

Despite having some minor issues here at keeping the rhythms as confined as they could be, this is still a ripping and thoroughly enjoyable surge of modern revival thrash that manages to work more often than not and makes for a rather appealing effort for those who satiate over the revival scene or simply thrash in general.