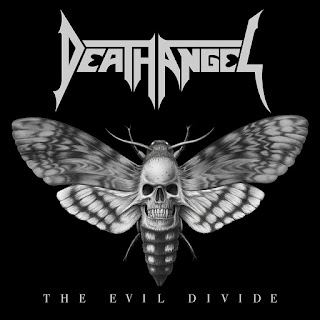 Three decades into their celebrated career, Bay Area thrash legends Death Angel remain as hungry as ever with an uncompromising urgency and unpredictability which has defined the group almost from the start of their illustrious career. With the reunion-era line-up continuing to sound as tight as possible and a maturity found in their years together, the quintet’s eighth full-length album was released May 27, 2016 on Nuclear Blast Records.

With the band firing on all cylinders in regards to their revival phase, there’s a deep, flowing hard-edged old-school attack prevalent on this one that takes their signature sound to great heights. Featuring their signature swirling speed metal patterns in ferocious tempos laying down plenty of hard-charging and dexterous rhythms that showcase plenty of fiery lead riff-work, tight patterns and furious rhythms that carry their frantic energy and relentless surging riff-work that make for a wholly impressive series of up-tempo work. Alongside these thrashers are efforts which drop that intensity for a more majestic, mid-tempo sprawling series of rhythms that go for a more atmospheric, melodic mood with a plodding energy and more pronounced melodic vocals than their more furious work, offering a strong and wholly dynamic variety that’s immensely appealing here. That charging, dynamic atmosphere here creates a truly ripping old-school feel as well with its multi-faceted tracks that range from the melodic epic intro that turns into the ripping thrasher to the melodic and straightforward mid-tempo breather which carries a strong old-school feel throughout here. This is certainly a case where the band is comfortable with this approach as there’s plenty of familiar moments within this one that brings to mind their past works with this approach, but for the most part it’s more of the same enjoyable elements that have always been part of their attack which makes this such a fun album.

Despite a big reliance on continuing to offer up more of the same here that doesn’t really bring along much variety or innovation, it’s a rather moot point on the album as there’s just such a vibrant, energetic old-school feel to this one throughout here that it’s one of the top albums of the year in the genre and is of extreme interest to old-school thrashers or thrash fanatics in general.