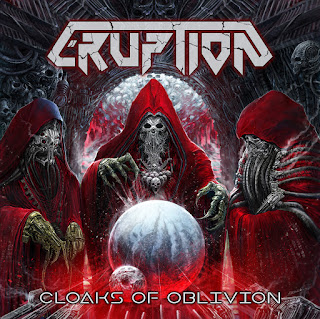 Continuing to expand their boundaries, the Slovenian thrashers under the name Eruption have kept a straightforward, consistent sound infusing their Bay-Area style characteristics with plenty of soaring melodies and a touch of class rarely found in the genre. With a five-year gap between proper efforts, the groups’ third full-length effort was originally released May 2, 2017 on Xtreem Music.

Once this gets going, it’s apparent that the layoff hasn’t halted their impressive attack in the slightest as the band is able to whip out their trademark elements effectively. This one goes for the trademarked blend of crunchy Bay Area style of riffing here leading to an enjoyable mid-tempo charge that continually manages to explode into stylized thrashing sections that still retain a strong hint of melody as well. That is an incredibly appealing attack here with the major foundation laid by the thrashing energy which melds incredibly well with the infectious melodic accents as both intermingling together give this one a varied attack featuring solid thrashing fury with a fine accessibility. When this one adapts more of a melodic base for their rhythms, the bands’ melodic accents give this one a much classier style of thrash-based attack that evokes more of a trad-metal attack, rendering this one with a stylish cross-section of variety at work here with the ability to switch between these factors being incredibly fun at times. The main issue at play here also manages to emerge here with the album being quite lackluster in the final half where these efforts are generally located. It tends to go for the long-winded traditional metal stylings that produces plodding epics more than thrashing burners which does lower the energy somewhat here. Otherwise, there’s not a whole lot else to really dislike here.

While there’s not a whole lot of real flaws featured here beyond the lowered energy in the second half of the album, it does come off a lot more enjoyable with it’s strong mix of strong old-school thrash crunch with plenty of melodic accents which makes this quite strong for fans of their previous work, old-school thrashers or revivalist thrash aficionados.


Does it sound good? Order it from here:
https://eruptionthrash.bandcamp.com/album/cloaks-of-oblivion
Posted by slayrrr666 at 12:22 PM