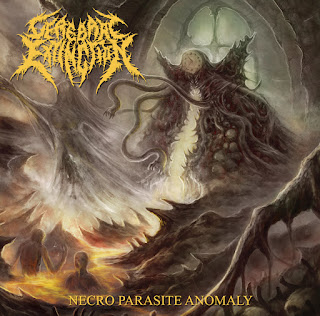 Focusing their intensity to the finest point, Italian brutal death metallers Cerebral Extinction have generated a solid amount of buzz around the scene for their initial offering several years ago and have spent the intervening years honing their skill-set into a lethal advantage. With the main two-piece joined by session drummer Il Kannibale and bassist Riccardo Rogari for the recordings, the sophomore full-length was released May 5, 2017 on Amputated Vein Records.

From the beginning here, the band is focused on featuring plenty of furious and utterly pummeling death metal rhythms that play out here. This one is based on utterly frantic and furious riffing that basically runs along at nonstop tempos throughout here, letting this one get awash in fevered patterns of tight, churning razorwire riff-work. Enabling this one to work at loud, ferocious tempos as the onslaught of unrelenting riffing featured here is balanced by the equally ferocious and blasting drumming that is on display from the very beginning, the end result is an utterly massive and pummeling wall of sound that brings about a great sense of fun throughout here. In a sense, though, that approach does end up being the albums’ somewhat singular downfall here. This one is so single-minded in its focus on blasting away with reckless abandon doesn’t really offer a whole lot of variety or diversity in their tracks. This ends up being so similar and familiar to each other that the tracks are basically distinguished only by their running times and it leaves this one feeling somewhat dragging despite the running time. Indeed, that’s an incredibly big factor against this one as well which is the short and overall brief running time which would’ve enabled some extra length here had this done a little experimentation in the rhythms. However, there’s still a lot of fun to be had here.

Despite a main flaw in managing to feature some rather one-note approach to its blast-heavy nature, there’s still a lot of fun here in the overall attack as the sheer relentlessness in flying headfirst into brutality makes this one a prominent choice for any fan of brutal death metal who are those who should come into this one.


Does it sound good? Order it from here:
https://cerebralextinction.bandcamp.com/album/necro-parasite-anomaly
Posted by slayrrr666 at 1:28 PM