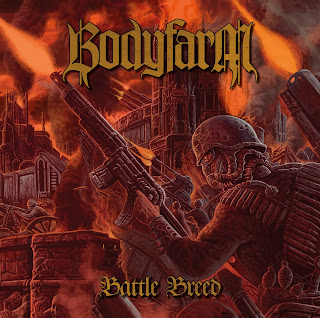 Gaining in experience and confidence with each release, Netherlands-based death metallers Bodyfarm are quickly rising up the ranks in terms of the old-school revivalist scene as they continue to grow and dominate with each new release. With a minor lineup shuffle that sees Alex Seegers settle into the bassist role after several other musicians rotated in-and-out of the role, the group’s third release was released November 6, 2015 on Cyclone Empire.

Like most of their brethren from the Dutch scene, this here is mostly classic-sounding US death metal with a touch of European style rhythms, as there’s the bands’ penchant for staying firmly in the mid-tempo realm while offering plenty of tortured, agonized riffing. Despite the tortured riff-work, this still manages to offer up the classic frantic thrash-style rhythms in their riff-patterns that offer up a dynamic gallop that’s quite impactful, generating the kind of generous tempo changes and variations here with the album split nicely between these mid-tempo patterns and the faster more frantic variations. Though it tends to really stay within these two styles as the dominant forces on the album, it’s quite enjoyable enough here while gloriously aping the old-school scene with the tight, swirling tremolo and chugging riffing patterns on display that take the classic American sound to it’s fullest while the melodic sensibilities added here to slow the music to a nice pummeling sprawl and let the rhythms breathe is a dynamic, imposing feat here. It’s overall style and approach here for this is given quite a healthy march through the old-school patterns, and is made all the better by the fact that it’s not a one-trick album where it’s top tracks are up-front and the filler presented in the back-half as there’s a strong amount of quality throughout here with raging tracks spread throughout here and furthers the appeal of this one immensely. Naturally, with that amount of old-school influence here comes the album’s one main downfall in it’s rather obvious and overt aping of the classic death metal sound that really isn’t all that new or offers up much else different from dozens of different bands out there beyond the bands’ obvious talent at portraying this style which goes a very long way towards giving this one it’s high marks. While that doesn’t hurt it all that much, it’s lack of real difference in exploring much else here is all that really harms it as the rest of the material is that enjoyable.

Though the lack of really doing much new innovation with their chosen genre being the one lone downfall on the album with plenty of other more impactful and enjoyable positives, there’s plenty to like here and this ends up a worthwhile pick for revivalist death metal fanatics and a solid choice for old-school aficionados that can appreciate what the new-school bring to the table.

Does it sound good? Order it from here:
http://www.bodyfarm.bigcartel.com/
Posted by slayrrr666 at 12:26 PM