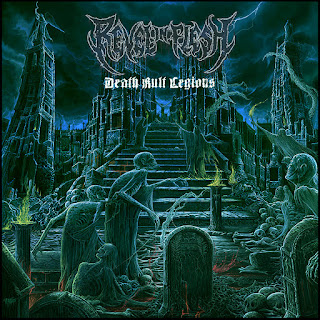 Continuing to honor their heroes, German death metallers Revel in Flesh have stayed remarkably consistent as they dwell in the realms of the Swedish scene for which they pay homage not only in their sound but from their namesake being a classic Grave track. Now almost two years of in-depth songwriting and production process has brought forth their third full-length effort released December 5, 2014 on new label Cyclone Empire.

There’s little overall surprise here, this one is straightforward and unyielding Swedish-styled death metal which goes for the traditional elements featured here quite frequently. This one goes for that typical swirling-style buzzsaw riffing patterns that were born in the early-90s Stockholm scene and manage to feature the same energy and infectious bursts of aggression that are featured prominently throughout here that give this one a touch of the strong melodies woven nicely into the main rhythms. While these are quite impressive, there’s a more prominent mid-tempo aspect here that simply features those elements played more with a chugging mid-tempo rhythm pattern that makes this one far more prevalent in keeping the effort plodding along rather than dropping it in favor of the blistering speed. Though it still conjures up the effortlessly melodic rhythms and epic arrangements that have always been featured here with this one sounding quite massive, the fact that there are just too many of the same plodding tempos does way this one down somewhat as there’s just not as much of a change within the album to really generate much more beyond the obvious enthusiasm playing this kind of material. Also, due to the overt and obvious influence taken here from the very beginning, this one isn’t all that original and doesn’t really go for the most creative riffing patterns or stylish arrangements here as it tends to be way too similar-sounding to numerous other old-school death metal bands that actually come from Sweden which has that same general approach and attack as shown here, and it can lose it’s identity quite easily. Otherwise, this one is still a somewhat solid and enjoyable effort.

Though it really does seem like numerous other efforts in this very scene which can cause this to become quite voiceless at times, there’s a palpable sense of enthusiasm playing these same rhythms throughout here that makes this one a solid choice for any Swedeath or old-school death metal aficionados, though those looking for more original bands should heed caution.

Does it sound good? Order it from here:
http://cycloneempire.bandcamp.com/album/death-kult-legions
Posted by slayrrr666 at 12:46 PM