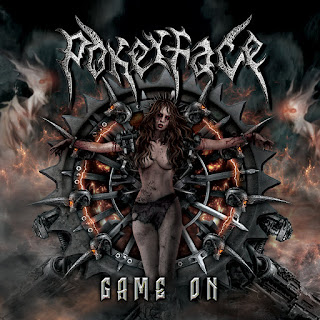 Continuing to spread their message, Russian thrashers Pokerface have taken their experience and relentless touring schedule into fine-tuning a more vicious and modern take on classic thrash than many of their contemporaries and results in a genuinely intriguing offering. Featuring a revamped lineup with new vocalist LadyOwl as well as guitar-team Xen Ritter and Vadim Whitevad, the groups’ sophomore full-length was released March 31, 2017 on M & O Music.

Much like their previous efforts, the album features a rather strong and engaging type of traditional thrash attack that gives this one plenty of enjoyable elements. The main focus away from the traditional crunch of the revivalist acts as instead they end up going for the heavier swirling approach common in death metal is a major reason for the appeal here, utilizing a much more vicious and ferocious attack. The deep, churning riffing and blast-heavy drum-work throws up a rather furious and intense style attack that’s incredibly appealing here given that this is kept at a higher tempo than normal and gives this the kind of generally favorable rhythms when dealing with the thrash attacks here, forcing this one along at these ravenous paces as the tight riff-work carried along throughout here is fast, dynamic and highly appealing which is a big factor of their debut that was expanded upon here and really wins this one over quite readily. There’s a small issue here in that the album tends to feel like it’s on repeat far too often and doesn’t really spread itself out as much as it could’ve based on the type of attack here since this one is pretty straightforward from the get-go and doesn’t really vary itself from relentless intensity as it’s main selling point. However, this isn’t really all that much of a detriment and barely dents the album as a whole.

There’s a lot to like here as the band has certainly grown since their debut days into a far more vicious and intense act that doesn’t really do much wrong beyond repeating themselves too often, but that’s not nearly enough to hold this one back from those that prefer this more intense thrash or are tired of the revivalist bands and want something else in the genre.


Does it sound good? Order it from here:
https://pokerfacerus.bandcamp.com/album/game-on
Posted by slayrrr666 at 3:18 PM