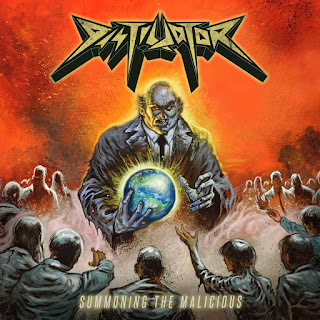 Following up the success of their previous work, Dutch thrashers Distillator have been bound and determined to add onto their burgeoning success by taking the old-school sound and influence popular in their work to the next step by adding more of these elements to the mix. Coming back with another concept album about freedom, the trio’s sophomore album was released May 1, 2017 on Empire Records.

Building off the success they had previously, the group is in fine form here as there’s a boundless sense of energy and enthusiasm coming off these tracks. Firing off tight, ferocious rhythms in blinding patterns, raging through plenty of ferocious tempo changes rather nicely as the band tackles the ripping energy from the old-school scene in grand fashion. Buoyed by a thunderous rhythm section, this one effectively bridges rather nicely the same tight patterns from the past with a more relentless modern-day viewpoint which manages to generate an effective main attack here with the solid old-school riffing on display. Likewise, once the album switches into the more mid-tempo realm there’s far more emphasis on steady, chugging leads and straightforward rhythms that make this one incredibly fun. There’s still prominent amounts old-school rhythms and leads in the riff-work which leads to a nice amount of variation present to help offset this. That does lead into the main issue to be had here in that, much like most of the work in this scene, it’s all pretty much a repeat of what came before. There isn’t a whole lot of creative or original work to be had here, leaving in far too many references to the past and really making it hard to take the group seriously with the amount of recycled work here. Still, it’s the enthusiasm that should win out here.

While nowhere near as original or creative as many other entries in the style, the fact that there’s still quite a lot to like here with the bands’ general attitude and intensity in their approach that it does serve as an intriguing choice for those looking for more revivalist-style or old-school thrash in general.


Does it sound good? Order it from here:
https://distillator.bandcamp.com/album/summoning-the-malicious-2017
Posted by slayrrr666 at 11:38 AM