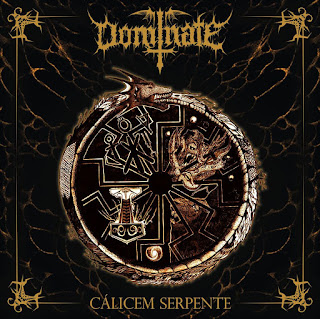 Formed back in 2008, the Colombian black/thrashers under the name Dominate took their time honing their cold, icy sound combining the concepts of paganism, occultism, world wars, philosophy, the return of man to his union with the universe and nature. Finally able to offer their first professional recording, the groups’ full-length debut was released in 2016 by Black Serpent Records.

From the onset, the group clearly favors the typically extreme end of the South American scene by offering everything that can be expected in such efforts. There’s plenty of traditional blackened thrash riff-work throughout here, taking up the raw end of the spectrum by going through the simplistic, straightforward paces with a reckless intensity that’s quite ferocious. Due to the rather simplistic manner the vast majority of the songs are an endless variation of fast, frantic and sloppy riff-work that blazes along at pretty consistent tempos as the only real variations found here is when it shifts into a solid mid-tempo chug following the rousing thrash-style efforts. This ends up exposing the rather sloppy and utterly simplistic matter of how the album is pretty much a showcase of one-gear songs that aren’t really technical standouts. The songs hit hard and viciously, but after awhile there’s not a whole lot to offer from this one with the sloppy and reckless play throughout here. As well, this is also hampered by being so obviously low-budget that the album does suffer from a weak production, filled with muddy guitars, weak drums and an utter lack of crisp sound ends up making this one much weaker than it should be by standing out quite obviously here. These here are what hold this one back.

While not a truly awful debut release, there’s quite a lot to like here with the infectious energy and rabid attack that’s much more prominent here that it does overcome enough of the flaws here to appeal to the fans of the South American extreme scene only while those looking for more quality in their efforts should heed caution.


Does it sound good? Order it from here:
https://www.facebook.com/DOMINATE.THRASH.BLACK.METAL/
Posted by slayrrr666 at 1:48 PM