Stormhammer - Welcome to the End 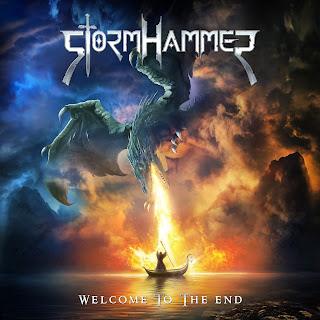 Artist: Stormhammerbuy now needed]
Release Title: Welcome to the End
Year: 2017
Label: Massacre Records
Genre: Power Metal
Tracklisting:
1. The Beginning of the End
2. Northman
3. Welcome to the End
4. The Heritage
5. Secret
6. The Law
7. Watchmen
8. Road to Heaven
9. My Dark Side
10. Into the Night
11. Spirit of the Night
12. Soul Temptation
13. The Awakening
14. Black Dragon

Continuing to carry on nicely, German power metallers Stormhammer have steadily built up their brand of power metal with the expanded use of live dates and constant work to get to the point where the band has improved with every release thus far. Keeping the same lineup from their last effort, the groups’ sixth full-length was released March 24, 2017 on Massacre Records.

Offering up plenty of rather impressive work here, this is driven quite nicely by the bands’ rather fun and impressive driving, melodic attack. Featuring a rather thick rhythm section, there’s a much heavier, more traditional-sounding structure built up here with a nice driving attack utilizing the more harder-hitting rhythms during the main sections here. That translates into a steady stream of heavy mid-tempo gallops for the most part here, letting the bands’ faster moments carry this one along to the point of enjoyment throughout here by going for the striking riff-work, the old-school sounding patterns and generous melodic rhythms that give this such a strong and enjoyable method of attack here that manages to hold this up one over the album’s one overbearing, glaring flaw that’s nearly impossible to overcome. Simply, there’s just way too many tracks here and it really wears on the longer this goes as it just features such an enlarged running time with over a dozen tracks here that there’s just no reason for the release to be this long, especially with so many of the songs here being pretty much of the same type and quality. The way this goes for the same fiery, energetic crunch as the earlier tracks the need for going on this long makes less sense with no deviation or variation, so regardless of the quality of the tracks the fact that this one has this bloated, overlong feeling is hard to pass-up and ignore.

While this one is just a touch too long and overblown with a few too many tracks here, there’s still something to be said for how energetic and engaging this one is in spite of that somewhat crippling factor here makes this one recommended mainly for hardcore power metal fans or those who can look past the flaws in this one.