Interment (Swe) - Scent of the Buried 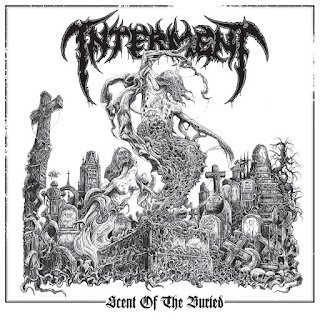 One of the original bands in the genre, Swedish death metallers Internment have gone through numerous hardships in their near three-decade existence which has seen the group continue to churn out their old-school Swedish sound in the interim. Now, after six years between releases and a few lineup changes that sees Toob Bryndal on guitars and Allan Lundholm on bass, the group finally releases their sophomore release April 1 on Pulverized Records.

From the onset here there’s little change-ups on display other than prime early-90s Swedish death metal with all the usual trappings, and it doesn’t really offer any difference from these rhythms throughout here. This one runs through all the prototypical elements that should get featured in the genre which means it utilizes the same general churning buzzsaw riffing patterns that alternate nicely between ravenous blistering thrashing with pounding drumming and agonized melodies swarming along throughout the tracks. As well, there are all the usual tempo changes from that go from these thrashing rhythms to a more majestic mid-tempo sprawl that utilizes more of a fine mid-tempo chug more than anything here as the speed is dropped in favor of the heavy-set riffing present which changes the style and sound significantly. As those are dropped off in favor of the thrashing-entered material in the second half of the album that significantly adds to the album with the enhanced aggression offering up plenty of ravenous tracks here which make for a rousing, high-energy affair. Now, none of this is anything revolutionary within the genre or even the individual scene where this is yet another in a long line of bands to emerge from the scene playing this exact kind of material, even though the fact that they originally were part of that movement at the very beginning makes that somewhat easy to overlook. There’s nothing wrong with it, and it works more often than not, but it is a determining factor for this one.

Though it’s nowhere near the most original band on this very scene that they were originally involved with at the very beginning, this here is quite the enjoyable and thoroughly enjoyable old-school blast of Swedish-influenced death metal for fans of that scene in particular or those that appreciate the old-school scene as well.

Does it sound good? Order it from here:
http://interment666.bandcamp.com/album/scent-of-the-buried-cd-lp-2
Posted by slayrrr666 at 12:12 PM