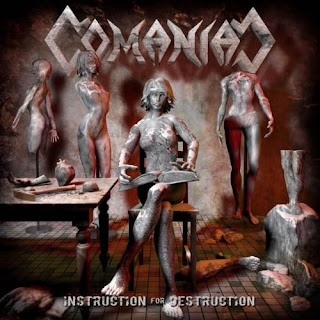 Continuing to spread their thrash roots, Swiss thrashers Comaniac has spread their old-school intensity and formula throughout their career as the band has grown in stature and technique in the intervening years following a lot of special touring and shows. Following up their debut offering, the quartet’s sophomore effort was released through SAOL on April 7, 2017.

Much like their previous work, the band offers a stellar mixture of dynamic old-school influences into their attack for a generally solid approach. Driven by the chunky mid-tempo riffing, the general emphasis here is on tight rhythms offering that explosive charge into the faster, more frenzied sections of the tracks. Balancing these styles together doesn’t always work, but it hits more than enough here to feature a fine mid-tempo chugging as a main source of attack for the majority of the album which keeps the energy level going strongly for the most part. It’s when the album deviates from these efforts which manages to cause this one to stumble where it goes into a series of abstract ideas, featuring jangled riffing or semi-ballad that really just sticks out so much against the rather fun thrashing on offer here that highlights the fact that some of this feature bland, uninteresting riffs. Basing a large majority of the patterns and arrangements off of the simplistic chug-rhythms featured here tends to make several of the tracks come off as bland and lifeless which is quite problematic when this one clearly shows an ability to cope with energetic chugging patterns, so the sporadic, hit-or-miss nature of these is a bit troubling. It's less of an issue as it was on the debut, which shows some solid growth to fix this but it still pops up here which causes this to come off a bit better overall even with this issue coming into play once again.

Still prominently featuring an issue that popped up from before but also managing to fix it in some regards, there’s an obvious growth featured here that makes this come off rather nicely for fans of their previous work or fans of less dynamic old-school thrash who can stomach the flaws here.


Does it sound good? Order it from here:
https://comaniac.bandcamp.com/album/instruction-for-destruction
Posted by slayrrr666 at 3:21 PM