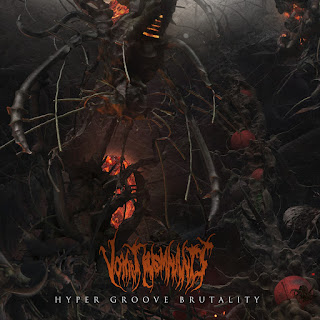 Finally returning to active duty, Japanese brutal death metal legends Vomit Remnants have been on hiatus for over a decade after being one of the most influential and important acts in the genre at the time of their break-up back in the mid-2000s. Now having reformed with Russian vocalist Dmitry Orlov onboard, the groups’ long-awaited sophomore album was originally released April 21, 2017 on Unique Leader Records.

Much like their previous works, this one manages to effectively convey a fine sense of brutal atmospherics and slick, swarming elements into a dynamic whole. Fueled by a strong series of furious riff-work that runs the gamut from ravenous churning grooves that provide plenty of thick rhythms to their tight, pounding slams that just overwhelm and pummel. Letting the slams take a backseat here to the ravenous riffing is what allows these faster tracks to explode with their trademark intensity and expert musicianship so that when the slams do make more of a pronounced appearance, they’re not completely out-of-place and still fit into the mix quite nicely. While this certainly sets the album up from the outset to be yet another stellar blasting effort, it does strike the same basic flaw that so many other bands in the style employ here. This comes about where it’s just way too much like a mindless stream of the same rhythms and patterns repeated endlessly to the point where it’s nearly impossible to tell where you are in the album due to it all sounding much too similar to everything else. Many of the tracks are played in the same tempo and feature plenty of repeated riff-work throughout, so it’s possible to lose track of yourself as it’s a blue of tight, intense music on an endless loop. Still, this isn’t an overly detrimental flaw and still works well enough.

A more than welcome return-to-form from one of the more enjoyable and respected names in the style, this one manages to offer up enough stellar moments throughout here that it does manage to overcome a lot of the minor flaws here and becomes a more than worthwhile choice for fans of their previous work or brutal death metal fans in general.


Does it sound good? Order it from here:
https://uniqueleaderrecords.bandcamp.com/album/hyper-groove-brutality
Posted by slayrrr666 at 12:19 PM