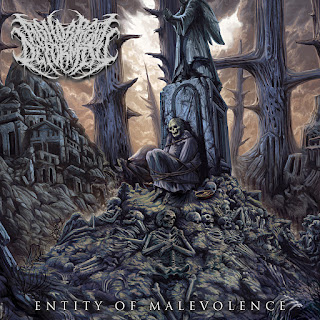 Founded in 2013, North Carolina brutal death metallers Abhorrent Deformity have quickly taken the scene by storm with an impressive onslaught of shows and rehearsals that turned out their first demo in less than a year of existence. Now finally ready to unleash their full-length debut, the effort is released October 30, 2015 on Comatose Music.

Taking their cues from the modern brutal death metal scene, the group decides to take on the usual series of utterly pummeling patterns and tight, frenzied riff-work for their attack. This allows for a series of blast-heavy rhythms and sludgy, dirty riff-work that range between those lightning-fast raging riffing to the more sprawling, stuttering paces that really round out the kind of scattered, frantic rhythms that are simply devastating in their approach. Other approaches here, from the series of rather hammering drum-work and simply blinding series of frantic patterns in the riffing that just produces a blur of discordant, sonic noise that really fuels the album’s brutality quite handily. That part of the album, though, really brings about it’s problem areas as this series of frenzied, utterly blistering rhythm patterns and boundless drumming really just doesn’t offer up all that much of a singular approach, taking it on so many varied tangents and highly disjointed arrangements that there’s little about these sections that really speaks to any coherent vision. They’re more content to simply fire away vicious and blistering patterns without little coherent thought behind them, and they come off bland and not all that impressive in the long run. Though it can somewhat be forgiven being a debut effort, there’s still the effect running throughout here.

Though it has some problems in the rather bland and overall directionless march of its brutality-laced rhythms, this is still somewhat less of an issue than expected due to being a debut and without a whole lot of other issues being present it manages to offer up enough that its appeal is strictly more for the less-discriminating brutal death metal savants.