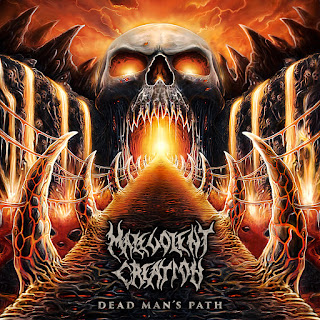 With a legacy back to the genre’s inception, Floridian death metal legends Malevolent Creation have endured harder and longer than most with one of the strongest collection of albums in the scene that truly continues on here. Graced with returning drummer Justin DiPinto and a charged focus in the five-year gap between releases, the groups’ celebrated twelfth full-length album is released October 2, 2015 on new label Century Media.

As is to be expected here, this one is a crushingly heavy and dynamic old-school style death metal album straight from the swamps of Florida, giving this a mostly stereotypical sound and approach. The album has the rabid, fervent near-thrash riffing that manages to evoke plenty of technically-proficient rhythms and ferocious charging patterns that are given plenty of room to breathe within the tight patterns. This old-school approach is quite prominent as the band dives through rabid thrash rhythms at frantic tempos, and is merged with a tight backbone of sprawling tempos to offset the aggression with deep, churning riff-work and relentless drumming. This is the essential part of the band’s core sound where it's a strong overall mixture between the rabid thrashing with some crushingly heavy yet slowed down rhythms that give their riffing plenty of room to breathe and yet still remain a vital part of their charge as it all wraps itself within that identifiable tone in the music featuring the agonized swampy patterns of the genre’s creators. With such a strong, even mixture between these styles and generating quite an enjoyable attack by alternating these tempos so well in the running order that the album tends to swarm through its paces with seeming ease, it’s quite an effective blast that offers up very little to dislike overall here except in one minor area that continually showcases itself in the music. This one is so strongly and effectively evocative of their sound that it’s really hard to tell the tracks apart at times as they loose themselves within that familiar blur of swampy riffing and technical thrashing that’s been a part of their work from the beginning, and it can cause this to drop off at times. Still, it barely registers at all and doesn’t impact it much.

By getting this overall stylistic and fervent approach to the forefront in yet another utterly strong and dominating release, there’s so little to dislike here which mainly comes from being too similar to their past works that it still remains a top choice for any fervent fan of their past catalog, old-school death aficionados or those looking for more of the same from these legends.