Marche Funèbre - Into the Arms of Darkness 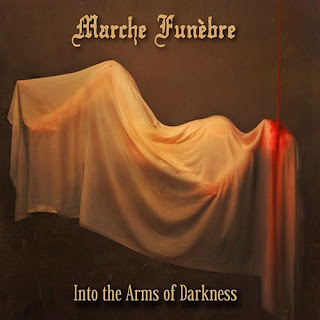 Working to further their sound, Belgium doom/death metallers Marche Funèbre have sought to expand and warp traditional views of the genre with longer song structures and plenty of dissonant work alongside the more familiar work available here. Putting their work to the fullest point after a four-year break, the bands’ third full-length effort was originally released February 20, 2017 on BadMoonMan Music.

Going for the grandiose segment of their sound, the band brings out plenty of familiar elements featured throughout here that make for a rather impressive outing. This one mainly goes for the extended, slow-churning sprawl that’s typically famous in the genre with plenty of exaggerated rhythms and running times here allowing for the band to access the full range of their influences. Those sprawling rhythms are accompanied nicely by loose swirling riff-work that gives this a melodic touch alongside the stylish plodding patterns driving this one along, giving it a warmth and atmospheric touch that’s quite pleasing throughout here. As this generally works out rather nicely for the album, giving it plenty of solid overall work here, there’s still the small annoying factor here of this one feeling just way too bloated in terms of its structures. This is felt in the second half where the tracks go for even more extended segments that do include slightly more vicious attacks but are still focusing on incorporating plenty of excessive elements to make them last far longer than really necessary here. The band was quite capable in the first tracks that containing plenty of enjoyable elements yet still had a solid sense of keeping it contained and organized, which is lost in the later half which is why those are nearly double the length and just makes the album drag on a little too much. Beyond this, though, there’s not a whole lot really wrong here.

It may suffer a touch by being just slightly too overlong for its own good by going for some extra arrangements and patterns that don’t really need it to be that way, but the enjoyable work elsewhere throughout here makes this one quite the appealing and enjoyable effort for any fan of doom/death in general.


Does it sound good? Order it from here:
https://marchefunebre.bandcamp.com/album/into-the-arms-of-darkness
Posted by slayrrr666 at 12:20 PM