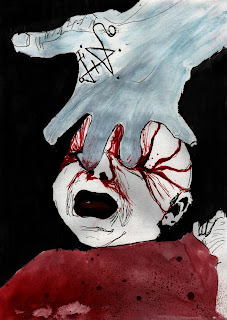 Continuing to crush the listeners’ souls, Italian death metallers Red Bible Black have turned to the darkest corners of the world to further explore their extreme sound by drafting in Emir Toğrul to help craft the bands’ sonic assault to it’s fullest. Offering up their first new EP release following a series of demos and splits, the new effort was released June 1, 2017 on Merdümgiriz.

From the outset, there’s very little throughout this one that appeals to the rational side of the crowd with the vast majority of the album featuring the same overall approach. The album is essentially a blur of raw, distorted riffing piling out plenty of deep, churning rhythms that makes for a wholly immersive experience. With the album essentially focusing on these issues almost exclusively and basically only changing up the tempo to go for mid-tempo verses or plodding lethargic sprawls for the different forms of variety here which indeed leaves this one with a furious intensity and anger but also quite an obvious flaw throughout it. The fact that everything really sounds the same, not only due to the use of repeated rhythms and patterns but also because of the overall rawness of the project which ends up leaving this one with a muddied sound that can make it indistinguishable what song you’re on during the release. That is somewhat negated by the intensity and energy of the performances but does end up lowering this one slightly.

While still containing plenty of solid, enjoyable elements, the fact that so much of this one is drowned out in the blur of repeated rhythms and a low-fi sounding production does hamper this one enough that it’s really only appealing for fans of the creative personnel involved or aficionados of raw death metal.

Does it sound good? Order it from here:
http://merdumgiriz.org/allahpromo.html
Posted by slayrrr666 at 3:55 PM