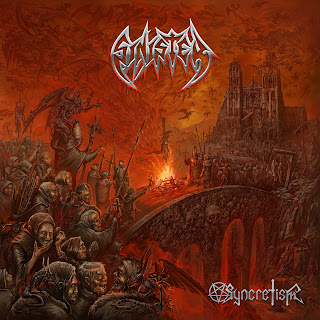 One of the most respected and uncompromising bands in the scene, Dutch death metal legends Sinister have weathered the storm of continuous line-up changes and the times to usher a monster of untethered ferocity and savageness that follows the path of their previous work. Joined by new guitarist Ricardo Falcon and bassist Ghislain van der Stel prior to the release, the groups’ thirteenth studio album was February 24, 2017 on Massacre Records.

As part of their continued history, the band is firing on all cylinders and making for some of the most sonically devastating work of their career. The main focus here is on ravenous, churning riff-work with plenty of tight, chaotic leads that frantically buzz along to the ferocious tempos featured here, and this makes for a stylistically enjoyable offering. These typically envelop the sort of dark atmospheres associated with the early days of the scene when they first appeared, and with the bands’ choppy rhythm section delivering a loud, churning backbone to this material the band offers quite a thunderous full-throttle charge offset by celestial keyboards for a majestic melodic bent. That style of melodic accent is enhanced slightly on the slower-tempo styles where things slow down into a slight chug that adds a great base for some of the keyboards that are placed throughout here to take on a far grander sense of scale and tone than otherwise would be the case here for most older-sounding death metal bands, and that works to its advantage here. This is overall fast, frantic and utterly ferocious in its delivery focusing on the savage riff-work and leaves the melodic accents to select spaces rather than overwhelming the album which can happen here. Some of the longer tracks could’ve been shortened by a minute or two and still leave this with a brutal beatdown, but it’s the one minor flaw in this effort.

Showing every bit of the measured attack and viciousness that’s defined their career thus far, this is a pretty savage offering that maintains their revered name in the scene overall and sees this as a wholly worthwhile offering for any fan into extreme metal, their past works or old-school death metal in general.


Does it sound good? Order it from here:
http://www.nuclearblast.de/en/products/tontraeger/cd/2cd-digi/sinister-syncretism.html
Posted by slayrrr666 at 3:40 PM