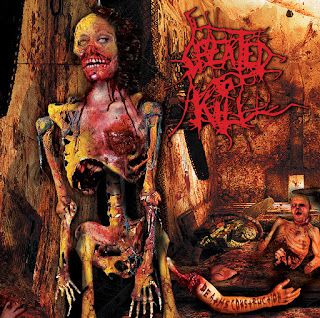 Continuing to deliver the brutality, Kentucky-based brutal death metallers Created to Kill have been built around their dedication to old school brutal Death Metal that is uncompromising and intense. With a five-year gap in between releases that sees long-time bassist Abe Simmerman put down the instrument in favor of bringing Phil Good onboard to join brother Paul, the group releases its second full-length album October 30, 2013 on new label Horror Pain Gore Death Productions.

From the outset, this here is pretty much a consistent and constant blast of frenzied, brutal death metal delivered with plenty of old-school verve. This is featured with the utterly ravenous and deep, tight riff-work full of frenzied arrangements and utterly frantic arrangements that give this one plenty of dynamic speed-drenched arrangements that makes for some truly impressive times. The loose, rattling rhythms mixed alongside these elements create a fine old-school approach in the riffing by offering up a fine series of thrashing patterns with plenty of furious and utterly savage arrangements while still giving plenty of fine tightly-wound riffing which is part of the wholesale approach to the genre which makes for quite the appealing time playing into the rules of that genre. That indeed is one of the main flaws here in that it’s quite formulaic and goes for the prototypical frenzied brutal death approach even with the inclusion of the more stable riff-work here and it does become somewhat of a massive blur as the album goes along due to the bands’ stature giving them so little room for refining the riffing and plays itself into that familiar playbook. There’s a dynamic and enjoyable crunch to the riffing that elicits quite the fun enthusiasm and competence at the style to overcome this slight flaw as it’s not the biggest detriment, but it does come up throughout this one and does hold it back somewhat.

Despite coming across as quite a familiar blur of frenzied riffing and pummeling rhythms that dozens of other bands in the genre offer, there’s still plenty to really like with this one’s generally furious approach and competence at their performances that it should be a worthwhile choice for aficionados of brutal death for the most part.

Does it sound good? Order it from here:
http://createdtokill.bandcamp.com/
Posted by slayrrr666 at 3:19 PM