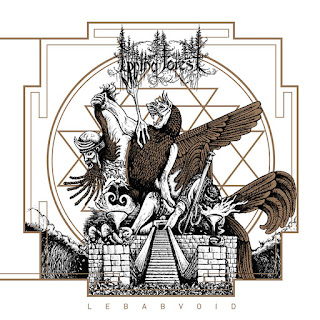 Artist: Epping Forest
Release Title: Lebabvoid
Year: 2017
Label: Unexploded Records
Genre: Death/Black Metal
Tracklisting:
1. Inception: Everblasting Doom
2. Though-o-Matic: The Pyramid and the Exodus
3. Affair: The Curse and the Heal
4. Kria: Resistance Is Useless
5. Lebab Void: The Universe in a Machine
6. Foretoken: A Mountain-Gorges Lullaby
7. Summoning: Three Hundred Out of the Sky
8. Demise: Twelve Times Twelve Sars
9. Hereafter: We Are Alone in the End
10. Cruel with Us

Certainly taking their time on releases, Portuguese blackened death metallers Epping Forest have always been more interesting in unleashing quality darkened material as evidenced by their two releases in nearly twenty years of existence honing their core sound. Following up after nearly a decade of silence with new bassist Trevash, the groups’ sophomore release was originally released March 10, 2017 on Unexploded Records.

Bringing their full intensity to bear, the band offers up plenty of furious and utterly dynamic work throughout here which allows for a lot of positives. This one tends to go for rapid-fire tremolo-picked riffing that is added nicely to the churning rhythms beneath so that the swirling riff-work takes on a frantic tone, offering up plenty of up-tempo sections that brings out the crimson-soaked accents in those tremolo patterns. By offering the majority of the tracks in this up-tempo manner, the riffing becomes even more dynamic with the blackened crunch taking centerstage for the majority of the album and giving this a blistering overall sound. Elsewhere throughout here, there’s a fine display of melodic brought to bear with the usage of exotic middle eastern melodies and rhythms to add a different dynamic to the album. These are mainly in the more down-tempo, slower sections which are balanced out incredibly well with the crushing rhythms alongside as the frantic blackened intensity dropping into sprawling melodic accents creates a perfect balance here. For the most part, it’s really only the sections here where they adopt a more ethereal, somewhat clean crooning that the album dips somewhat into softer realms that are quite an odd contrast against the raging blackened cacophony on display during these sections. Beyond this issue, it’s a wholly explosive offering.

Without too many issues to detract this one from it’s more enjoyable elements, this explosive comeback offering brings about just about all the classic elements expected from the band which makes this a wholly worthwhile offering for fans of their previous work or fiery death/black metal in general.


Does it sound good? Order it from here:
https://eppingforest.bandcamp.com/album/lebabvoid-deluxe-golden-digipack
Posted by slayrrr666 at 12:28 PM