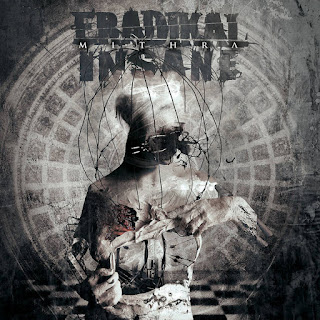 Founded back in 2004, French death metal/metalcore fusioners Eradikal Insane have certainly seen their share of struggles over the years and have honed the anger and intensity into a fine package. Finally making it to their debut effort, the group brings aboard several notable guests to join in the occasion as it’s independently released September 7, 2015.

Managing to take on several extreme subjects as a whole, this whole affair is really centered around it’s tight, grinding riff-work that offers plenty of enjoyable elements, fast, razor-sharp and filled to the brim with intense patterns, this is a furious hard-hitting assault that really works quite well at generating the kind of savage baseline to incorporate plenty of other extreme elements into their sound. The faster tempos at play here and technically-challenging riff-work featured with this also works in connection to that savagery, and when put together that gives this the kind of savage approach that’s buffered quite nicely by the album’s propensity to introduce breakdowns into their tracks. Played with the typical hardcore approach where it’s all about the stuttering start/stop approach that comes slamming to the forefront of the tracks, it takes plenty of hard-hitting action to the forefront of the tracks and manages to make for a much stronger and fully enjoyable offering with all the brutality present here. The fact that the album does manage to stumble slightly with it’s riff-work as the album appears way too one-note at times where it’s running through pretty similar patterns which tends to cause this one to get into rather familiar territories quite quickly especially during the middle portions where it’s run through numerous repetitious patterns already by that point and it’s quite obvious retreading on familiar ground. Likewise, the bands’ inclusion of breakdowns into their music might be a cause for concern for some as there’s a decided backlash against that kind of element mixed into their extreme metal, though it’s not all that bad overall.

Though there’s some minor flaws to be had here, some of it worthwhile and some of it due to personal preference, there’s still enough positives to be found here that there’s more than enough appeal to be had for those that can overlook the flaws to enjoy the extremity offered while those that aren’t in the slightest brought in by that nature should heed caution.


Does it sound good? Order it from here:
http://eradikalinsane.bandcamp.com/
Posted by slayrrr666 at 11:54 AM