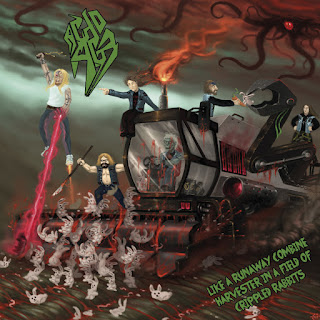 Following the success of their past release, Irish thrashers Acid Age has soldiered on with plenty of critical support and live dates that has honed their hyper-thrash style into a fervent cocktail of explosive metal. Bringing their style to the forefront on their second full-length album, this was originally released June 24, 2016 on new-label Witches Brew.

For the most point this one here manages to readily explore the kind of feverish up-tempo thrashing found in the kind of modern crossover styles with the riffing here generating the kind of frantic, straightforward patterns that simply bleed speed. The blinding technicality and ability to deftly maneuver through a variety of dynamic tempo changes that manages to feature plenty of work here from choppy crossover-fueled rhythms to stuttering mid-tempo thrash and then frantic full-throttle modern-tinged rhythms here all with a fine ease. There’s plenty of spectacularly rabid riffing in these sections where it really overwhelms with it’s speed and technically-proficient pattern changes, though it also signals the start of the album’s minor flaws. The album’s rather one-note approach here with that riffing style is what somewhat hurts this one as there’s just not all too many chances to really focus on the ravenous riffing as there’s simply not much to the album. It’s too short and really condensed with only a few real chances to get this going as it’s blistering riff-work runs this through so quickly that it’s onto it’s next track before it really gets a chance to explore these rhythms even more, and it’s really the only thing that holds this one back.

With plenty of rather enjoyable elements here really upset only by the fact that there’s too much one-note work that gets exposed only through the lack of chances here, it’s really fun and exciting enough to work itself out to be a solid choice for hardcore crossover thrash aficionados though others might want to heed caution with this one.

Does it sound good? Order it from here:
http://acidage.bandcamp.com/album/like-a-runaway-combine-harvester-in-a-field-of-crippled-rabbits
Posted by slayrrr666 at 3:08 PM