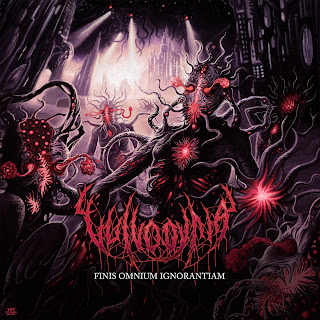 Wasting little time between releases, South African slammers Vulvodynia have taken the momentum gathered on their debut to quickly turn around into another stellar, stand-out release. Managing to fix the critical issue with the last album by trimming it down into a solid EP release, this was originally released July 31, 2015 on Vicious Instinct Records before a vinyl re-issue in September 2016 on Transcending Records.

Containing the same basic outline and formula as the last release, this is yet again another stellar and outstanding slam-filled release that contains the type of relentless approach that utterly overwhelms with the amount of slams it supports. Going into the same chug-filled approach in between the music and containing the kind of generally appealing deathcore-styled breakdowns wrapped alongside the stuttering rhythms throughout, the album is a dense, heavy and thickly-layered assault that’s pretty pummeling in it’s display and overall technically-improved output as that becomes the main selling point with this one in it’s overall growth of technical proficiency. The riffing is a lot more challenging and dexterous here with the enhanced running time of the tracks allowing for a more dynamic display of riffing present here and it’s quite an extremely impressive addition to their ravenous slam-based approach. Likewise, the trimming of the tracks down doesn’t affect this one all that much either as there’s plenty of fantastic moments spread throughout here that comes off as impactful as it does in accordance with the blasting slams featured here. There’s just so much to like with this one that it becomes far more enjoyable than the initial debut.

One of the better releases in the year overall and easily their finest work yet, this release fixes the minor problem from the past album while continuing to focus heavily on their sound going forward, managing to appeal wholly for the bands’ previous fans as well as brutal or slam death metal fans in general.

Does it sound good? Order it from here:
http://www.transcendingrecords.com/cgi-bin/productDetails.cgi?pid=9502&cid=
Posted by slayrrr666 at 12:35 PM