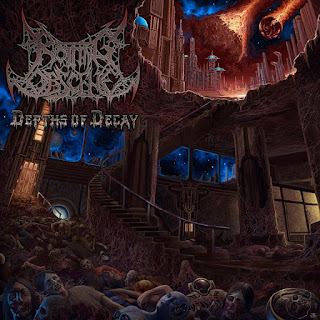 Storming onto the scene in 2011, Virginian technical death metallers Rotting Obscene got their start with an impressive 4-song demo not long afterwards which signalled the start of a series of lineup shuffles that sees the band finally settle down into a devastating four-piece. They have returned in 2016 with their debut full-length album which was initially self-released March 22, 2016 before a reissue July 22, 2016 on Transcending Records.

For the majority of the album this here offers a strikingly enjoyable burst of technical death metal that manages to get the majority of the great points here from the fact that it’s a wholly dynamic variety of technical death metal. Ranging from the traditional technical wankery that manages to infest this one with a series of highly-complex and challenging riff-work that begins dive-bombing and swirling around the remaining rhythms while incorporating fiery, dynamic soloing into the mix to a series of solid and wholly enjoyable open-ended grooves that rip throughout the music here by letting the main driving rhythms slow down into a more generous section while still maintaining a complex vibe that allows for quite an overall wide degree of variety here within the album. Being able to handily change from the two styles with surprising ease gives the album a great deal of personality with the constant switch-overs between the dazzling technical displays to a more vicious, brutal sprawling section is what packs a huge wallop here and offers up the kind of dynamic impact that really wears on the listen as it beats and pummels for it’s duration. The lone factor here that olds this back somewhat is the album’s rather overlong feel here at times as this is something that really doesn’t need to be as overlong and filled with all the excess tracks that it does here. Several of the longer tracks here are what could’ve been trimmed down a little, leaving this with some rather bland sections by simply continuing on long past the point when they should’ve stopped merely to further showcase their skill-set or deliver a beatdown that’s not necessary. Otherwise, this one was quite an impressive debut effort.

Despite a few areas that need trimming here and there that makes this a little longer than needed, there’s still a great deal of work to be found here that’s immensely enjoyable that it’s enough to really overcome that minor flaw and make this a solid, engaging effort for technical or brutal death metal fanatics who constantly need more of the stuff.

Does it sound good? Order it from here:
http://www.transcendingrecords.com/cgi-bin/productDetails.cgi?pid=9487&cid=
Posted by slayrrr666 at 10:22 AM