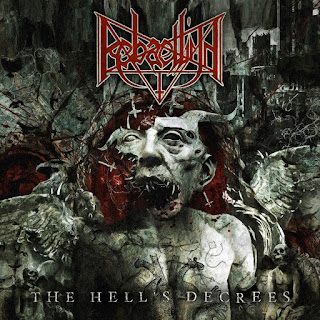 The third full-length from Brazilian death metal horde Rebaelliun ultimately shows that their decade-plus long disbanding hasn’t slowed them down as they pick up right where they once left off. This has the band’s trademark sound and style dripping all over this release, running the full gamut of technical and brutal riffing here with blistering displays of tightly-wound rhythms charging along into ravenous speed-drenched patterns that are running along through rather impressive tempos allowing for the various changes and tight arrangements that have always been present throughout their sound. Generating that speed with these kinds of dizzying riffing creating the different sections filled with steady mid-tempo paces or blazing along through the intense barnburners makes for a fun time here as that type of attack was prevalent in their sound from the beginning and it’s still as crushing and heavy as it was. Added along with their dynamic blasting drum-attack that piles on the blasts and choppy, up-tempo patterns that matches the generous speed anthems here it makes for a wholly pleasing and cohesive effort that still sounds like the group hasn’t lost a step at all. This ends up being the one minor misstep here in that all the album does is reaffirm what the band was all about from the beginning with this one running through all the motions of their previous attacks without much deviation, and considering the overall brevity of the album that leaves this with a feeling of wanting more out of it, but in the end this is a negligible flaw that shouldn’t hold it back too much.

The first half reintroduces the band in grand style. Opener ‘Affronting the Gods’ features blistering riffing and dynamic blasting drumming through tight, technical rhythms with plenty of frantic rhythms carrying the intense tempos along with plenty of battering drumming keeping the swirling riff-work along through the fiery solo section and keeping the tempo into the finale for a strong, impressive highlight. ‘Legion’ uses deep, crunchy riff-work and frantic, blasting drumming keeping the intensity blazing along through the chaotic, spastic leads and urgent rhythms throughout the blazing, up-tempo series of technical patterns following the chaotic solo section as the tight patterns continue into the final half for another explosive and blistering track. ‘The Path of the Wolf’ uses immediate blasting drumming and sharp, technical riff-work blazing along to utterly frantic and up-tempo rhythms holding the tight technically-charged patterns along throughout the sprawling mid-tempo solo section before bringing the intensity and blazing through the finale for a great highlight. ‘Fire and Brimstone’ features an extended noise collage intro before turning into a tight, steady mid-tempo gallop with technical riffing and dexterous, pounding drumming while the droning, surging riff-work carries the mid-tempo patterns along throughout the steady final half for a decent effort held back mostly for the lack of speed.

The second half keeps that momentum going rather nicely. ‘Dawn of Mayhem’ utilizes immediate and blistering riffing alongside blistering, blasting drumming and pounding rhythms charging along through frantic tempos with stylish mid-tempo melodies slowing down the speed leading into the solo section as the technically-challenging riffing carries the energy throughout the finale for another high-quality effort. ‘Rebaelliun’ takes stylish mid-tempo riff-work and technical chugging rhythms through sprawling mid-tempo paces with plenty of urgent rhythms throughout the mid-tempo pace as the strong leads continue carrying the steady pace through the solo section and on through the steady rhythms in the final half for a solid, enjoyable effort. ‘Crush the Cross’ features heavy, thumping rhythms and dexterous, complex drumming turning into a frantic, up-tempo series of thunderous patterns carrying the tight riff-work and intense blasting drumming along the surging rhythms full of frantic, speed-drenched patterns through the solo section and on into the finale for another strong overall highlight. Lastly, album-closer ‘Anarchy (The Hell's Decrees Manifesto)’ uses blistering drum-blasts and tight, frantic riffing through an intense series of blazing mid-tempo rhythms full of dynamic technical riffing as the blasting drumming brings the up-tempo intensity back through the solo section and on through the final half for an explosive and enjoyable finishing touch here.

While it doesn’t reinvent the wheel when it comes to these venerable and well-missed legends, the fact that it still sounds so much like the bands’ heyday and hasn’t missed a step attack-wise makes this a wholly worthwhile investment for fans itching to see their assault continue or even fans of the overall style.

Does it sound good? Order from here:
https://www.facebook.com/Rebaelliun/
Posted by slayrrr666 at 11:03 AM