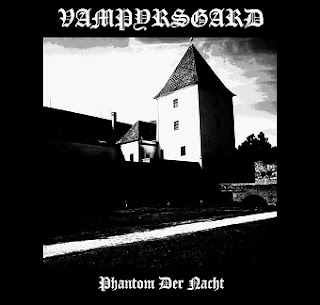 The debut album from Spanish black metal band Vampyrsgard comes off as a rather intriguing and at times enjoyable release from a band without any releases prior to this point. From the onset this here seems to be set-up primarily as a rather traditional outfit just with a much more melodic bent to the music. The main genesis is still swirling tremolo-picked patterns straight from the second-wave Norwegian originators, though they get balanced out by much heavier melodic leads running throughout the tracks. There’s a solid usage here towards generating the more up-tempo variety to really work nicely overall here utilizing a more mid-tempo and plodding pace within the confines of it’s simplistic style here of it holding onto a steady pace without overdoing or needlessly complicating itself than it really has to here, giving the songs a nice impact without offering up tons of over-used rhythms or patterns. This does feel very nice when the tracks work, but it can lead to deathly boring affairs when the pacing and songwriting aren’t up to par which is the main element holding this one back. It’s a problem inherent in the tracks due to the bands’ overall inexperience and youthful age where it hasn’t had the opportunity in really honing in on their prefered style rather than just jumping out with a full-length effort right from the start where honing out how to properly make their style a lot more cohesive, and that does manage to stick out here because of that..

The first half here does showcase the bands’ attitude the best on here. Opener ‘Vampyrsgard’ features utterly blistering tremolo riff-work and frantic drumming that settle into a rather steady pace with a thumping drive to the main rhythms alongside the ambient keyboards driving along through the clanking tremolo patterns swirling throughout the final half for a solid opening impression. ‘Believe in Darkness’ takes a gradual build-up with pounding drumming and stylized mid-tempo tremolo riff-work building along to the thumping drumming and stylish mid-tempo paces running along with the thumping rhythms holding alongside the pounding patterns of the finale for an enjoyable enough offering. ‘Sensual Neck’ utilizes impressive swirling tremolo-pitched patterns and steady, simplistic pounding drumming to keep the steady tempos in place throughout the melodic main rhythms running with the simplistic and rather stylish mid-tempo rhythms carrying through into the final half for a nice highlight offering. The title track uses a light acoustic intro before blaring into raging, frantic patterns with furious blasting drumming and melodic swirling tremolo patterns leading throughout the highly melodic up-tempo swirling riff-work pounding along throughout the finale for another strong back-to-back highlights.

Though fallen from the upper half, this one does have some decent enough moments in the second half. ‘Fallen’ uses an extended melancholic intro before turning into a stylish mid-tempo series of swirling tremolo riff-work with pounding up-tempo drumming keeping the steady patterns along throughout the droning endless swirling riffing holding throughout the final half for an enjoyable if still somewhat bland effort. The instrumental ‘Under the Power of the Midnight Fullmoon’ also utilizes the acoustic lead-in that runs along through the swirling riff-work with plenty of melodic leads and simplistic drumming throughout the mid-tempo pace leading into the finale for a solid mid-album breather. ‘Black Coffin’ features melodic swirling rhythms and steady, simplistic riff-work droning on into an endless series of swirling slow-tempo patterns as the drum-work keeps the plodding tempo in check throughout the plodding rhythms into the final half for a rather bland and drawn-out offering. Lastly, album-closer ‘Delicious Blood’ uses tight swirling riff-work and blasting drumming throughout the steady mid-tempo patterns holding the droning melodic leads nicely alongside the simplistic drumming that nicely brings the swirling tremolo riff-work throughout the finale for a solid lasting impression.

Though the bands’ inexperience and youth does become apparent at times throughout here, there’s enough quality and worthwhile moments here that it doesn’t hold back to where it should end up appealing quite nicely with fans of older black metal or those that prefer the slower, heavier side of the genre.


Does it sound good: Order from here:
http://www.sklep.oldtemple.com/album/310-phantom-der-nacht-vampyrsgard
Posted by slayrrr666 at 10:26 AM