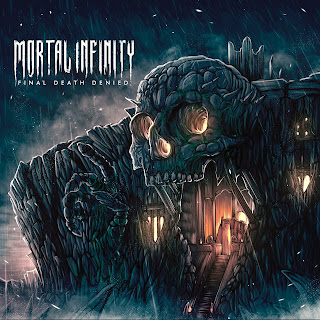 The second full-length from German thrashers Mortal Infinity offers up a rather enjoyable if slightly faulty attempt at a more American styled thrash attack than their German counterparts. In their thrashing modes, the band here is far more intent on utilizing the traditional Bay Area-styled attack here for the majority of their work. Utilizing tight, crunchy, mid-tempo chugging as the basis for this one, this one really puts those rhythms to great use in generating the kind of up-tempo, frantic paces that work best with this style of attack. Alongside the faster, blistering tempos this one really manages to get out a lot of the more mid-tempo work on display where the chugging patterns and tight, steady drumming tend to work over even more of the tracks here for what’s the most prominent style featured on the album. While this effort does get plenty of mileage out of those chugging rhythms, it does crop up as one of the main points against this one. With the group relying on that mid-tempo pace here without much deviation here within their patterns and arrangements, the tempos on so many songs seem to mostly plod along to the finish line without really generating the kind of vicious streak mostly associated with so many thrash acts. Likewise, beyond this problem with the main rhythms, another problem emerges here in the fact that this one ends up being far longer than it really should’ve been. While some of this comes from the plodding riff-work, others are far more curious as to why it’s so overlong where it certainly builds up to a ripping, full-speed thrasher only in the later half after most of the track has been a plodding mid-tempo series of crunchy riffing without a lot of energy. That’s understandable, but the epic isn’t graced with such excuses as it just wears on with the same riffing for nearly ten minutes without let-up as it winds on through it’s paces seemingly endlessly which results in a gaudy, overlong effort that stretches this out needlessly. It really is a problem moreso for being the closer, and it leaves a disappointing lasting impression that way.

The first half here sets this one up quite nicely. Opener ‘Grid Specter’ features tight, twisting riff-work and pounding drumming along a steady furious pace with plenty of twisting technical patterns within the mid-tempo charge with thumping rhythms driving the frantic riffing through the blistering solo section and on through the winding final half for a solid, raging opener. ‘Cult of the Dead’ uses a tight, crunchy series of riffing against utterly blistering, frantic drumming into a steady, solid mid-tempo charge with plenty of blistering rhythms working into a frenzied pace holding the main rhythms into the melodic solo section leading the discordant rhythms to carry into the finale for another strong effort. ‘Revived by Surgery’ takes a stuttering series of start/stop swirling riffing and tight drumming into a plodding mid-tempo series of riff-work that turns into a rather frantic series of blazing riff-work and frenzied drumming leading into the fade-out final half for a wholly unappealing and rather disappointing track. ‘Under the Serpent Tree’ uses a steady, gradual build-up that turns into a bouncy up-tempo series of crunchy riffing and plenty of pounding drumming that manages to bring the explosive patterns to thrash along to the strong swirling riffing stuttering into the solo section and carrying along into the finale for a more enjoyable effort. ‘Hell Is a Crematory’ features steady, mid-tempo charging riff-work with plenty of crunchy riff-work along through the plodding rhythms that work alongside the squealing leads with the plodding chug riffing before kicking up the energy with furious riffing and pounding drumming in the solo section and carrying that through the final half for a better track in the later half.

The second half here isn’t as enjoyable here and really shows off the album’s flaws. ‘Body Collector’ uses the sampled squished-meat intro to lead into a steady mid-tempo rhythms with the occasional blast into raging up-tempo drumming that manages to bring the riffing out of the plodding paces into tight, crunchy chugging into the solo section and carrying into the finale for a decent if not all that impressive effort. ‘Haunted Mental Asylum’ takes rocking drum-work and stylized riffing on through a bouncy mid-tempo pace with a steady crunch from the riffing holding the main series of thrashing riff-work running along throughout the raging solo section and keeping the blistering paces throughout the final half for a stellar highlight. ‘Sleep Paralysis’ features crunchy mid-tempo riffing chugging along to mid-tempo drum-work that settles nicely into mid-tempo thumping rhythms with stylish, fiery riffing keeping the steady pace along through the atmospheric melodies before kicking back into the frantic rhythms in the finale for a solid and enjoyable effort. ‘Neurotoxic Fire’ features simple swirling riffing with steady, mid-tempo pounding drumming keeping the rumbling chugging patterns holding along at an unchanging tempo with a sweeping series of crunchy chug-patterns throughout the solo section and keeping hold until the final half for a wholly solid and enjoyable effort. Finally, the epic album-closer ‘Dystopia’ uses an extended fade-in intro as the scratchy sampled voices gradually give way to ripping drumming and crushing mid-tempo chugging riff-work keeping a steady stream of thrashing rhythms along at a straightforward pace that lets the series of solo sections work through the varying tempos utilized with the straightforward tempos working along into the mid-tempo finale for a solid and decent if entirely overlong effort for a somewhat disappointing lasting impression.

While it’s a fine enough listen on its own right, the fact that this one here hardly ever seems to go for the kill in regards to it’s intensity and ferocity does hold it back to the point that it’s really more for the most undiscriminating thrash aficionados or German metal connoisseurs who will find the most to enjoy here as others will undoubtedly approve of more vicious acts out there.

Does it sound good? Order from here:
http://www.facebook.com/MortalInfinity
Posted by slayrrr666 at 4:32 PM