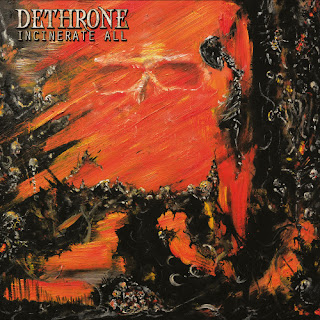 The second full-length from Swedish thrashers Dethrone continues to follow the old-school way of bristling and energetic full-on mixture of death and thrash metal. Judging from the music alone, it’s pretty clear that what’s on display here is prime-era Swedish-styled thrash that was exploding on the scene at the start of the last decade, and it’s carried over here. Ripping razor-wire thrash riff-work, sounding not too dissimilar to the burgeoning Metalcore scene, dominates this one from the get-go and shows a keen ability of this one feeling like a revival act for that time period letting the more vicious patterns and arrangements get utilized instead of the tight crunch and more traditional riff-work that made it’s way in the Bay Area influenced acts. There’s even a nice amount of chugging patterns here to further that connection within the music, and combined with the odd moment of melodic interjections in the leads featuring explosive soloing and more dexterous, dynamic drumming that keeps things in spurts or offering a mid-song breakdown to lead back into some fine intense thrash patterns, this becomes quite fun and far more rousing than it really should be. This does manage to feature the bands’ old-school influence quite nicely but also holds it back from the standpoint of wearing those influences far too close to the vest as it were. There’s not a whole lot of originality on display, running through many of the same patterns and riff-work that was on offer there which is only given a more melodic boost with the leads featured here but is otherwise still very much of that style for the most part.

The first half here is a fine starting point to this one. Opener ‘Reborn in Fire’ gradually builds into a frenzied series of swirling riffing leading into thumping rhythms and frantic, full-throttle tempos running along the frantic thrashing riff-work buoyed by razor-wire melodic hymns and pounding drumming leading into the melodic solo section and into the swirling finale for an explosive highlight offering immediately. ‘The Plague Carrier’ uses pounding drumming and stylish technically-precise riffing to lead through the steady, mid-tempo thumping pace that features plenty of melodic flurries to offset the steady pounding riff-work swirling along into the final half for an enjoyable effort. ‘Rat King’ features tight, immediate riff-work and thumping dexterous drumming keeping a fine mid-tempo pace with plenty of steady swirling melodic thrashing patterns swirling along into the frantic stylish riffing and dexterous patterns along the steady mid-tempo finale for a decent enough effort. ‘Morbid Existence’ uses a thumping mid-tempo series of swirling riff-work and pounding drumming that holds a steady pace with the frantic interludes bringing the fiery melodies along into the rather dynamic choppy rhythms pounding along to the up-tempo pace into the solo section and on through the final half for a rather enjoyable if unspectacular offering. ‘Spiritual Deception’ immediately blasts through swirling razor-wire riffing and dexterous drumming that keeps the tight melodic rhythms running along into the fine breakdowns holding the melodies through the frantic series of buzzing riff-work following the tight leads into the melancholic finale for a rather enjoyable effort.

The second half does come off a little better in regards to some better songs overall. ‘Where Darkness Dwells’ uses a series of tight and blistering riffing with plenty of heavy thumping rhythms and dexterous drumming with frantic, fiery melodic leads running along to the mid-tempo speed-drenched rhythms that hold the tight riffing into the solo section and on through the charging final half for a strong effort overall. ‘I Am God’ features a tight, thumping build-up intro into a series of explosive patterns racing along at frantic stuttering tempos letting the steady riffing thrash along to the steady patterns leading into the strong melodic leads as the frenzied patterns hold out into the tight finale for another strong track. ‘Failure’ takes strong swirling riff-work chugging along with utterly relentless double-bass blasts and tight crunchy riff-work carrying a strong series of melodic rhythms running along through the strong series of twisting leads in the solo section and carrying on through the final half for a really impressive highlight. ‘Dawn of Demise’ utilizes raging swirling riff-work and blistering drumming through a frenzied pace with a steady series of mid-tempo pounding drumming and plenty of crunchy razor-wire patterns leading along through the choppy thrash patterns full of crunchy riff-work into the finale for a decent enough effort. Album-closer ‘The Inevitable End’ uses crunchy riffing alongside frantic drumming and plenty of razor-wire rhythms keeping the steady mid-tempo pace along throughout the steady series of intense riff-work with plenty of sterling razor-wire patterns leading into the dexterous drumming that carries along the final half for an enjoyable enough lasting impression.

Though nothing here is really all that innovative or original, there’s a noticeable enthusiasm with regard to how this comes off that makes this old-school throwback far more compelling than it really needs to be and makes this an ideal choice for the old-guard for Swedish-flavored thrash or thrash in general.

Does it sound good? Order from here:
http://dethroneswe.bandcamp.com/
Posted by slayrrr666 at 4:03 PM