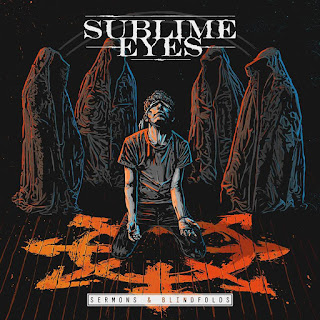 The second album from Norwegian melodic death metallers Sublime Eyes offers a rather enjoyable if slightly formulaic brandishing of the genre throughout here. The riff-work on display here is mostly determining of that kind of melodic fire throughout here by offering up a strong series of heavy traditional-styled rhythms that are quite a bit heavier and more dynamic than would be expected from most melodic death metal outfits that then allows the melodic flurries to be sprinkled along for maximum impact. Putting alongside some nice thrashing drum-work alongside that gives this another strong element at play with the more frantic, up-tempo tracks here letting the fiery melodic leads even more room to breathe quite nicely here and generate some overall impressive moments here when this one lets it rip. Though this is all highly enjoyable and often responsible for some great tracks, there’s one overriding problem running throughout here in that the tracks just don’t really offer much variation to stand out from the crowd. However hard-hitting it may be and however infectious it features with the riff-work, this is still a pretty straightforward release that doesn’t really change the wheel or go for any kind of experimentation as the album is a simple, straightforward release played nicely enough and with conviction but doesn’t really generate anything new overall.

Overall this one doesn’t have all that much wrong in the first half. Opener ‘Greedy Hands’ slowly works into a sweeping melodic bent utilizing pounding drumming and up-tempo swirling tremolo patterns throughout the tight, chugging melodic leads running alongside the thumping rhythms holding the blazing leads thumping along to the heavy riffing in the final half for a strong, impressive opener. ‘Ten Stones’ features pounding drumming and swirling tremolo riff-work into a rousing, energetic series of thrashing rhythms and dexterous drum-work turning through a strong series of mid-tempo chugging rhythms leading into the swirling solo section and continuing the rousing energy into the finale for another enjoyable effort. ‘Destroyer’ utilizes sweeping melodies and churning rhythms with pounding drumming through a rather fiery series of mid-tempo patterns keeping the pounding drumming alongside the rumbling series of riffing through the solo section and into the fiery melodic final half for a decent enough effort. ‘Shellshocked’ utilizes deep, churning riffing alongside dexterous drumming and light melodic leads keeping the tightly-wound riffing along through the stuttering rhythms as the explosive swirling melodies and thrashing drumming carry on through the blasting finale for a solid and enjoyable offering.

While it doesn’t necessarily reinvent the wheel when it comes to the rather healthy and vibrant melodic death metal scene, there’s enough firepower and melodic tendencies on display to definitely make this not only a growing contender in the scene to come but also a hard-hitting act that should appeal to those with more traditional flavorings to ease into very nicely.


Does it sound good? Order from here:
http://www.auralwebstore.com/shop/index.php?id_product=801&controller=product&id_lang=2
Posted by slayrrr666 at 4:16 PM