Behind the Shadows - Raising Hell 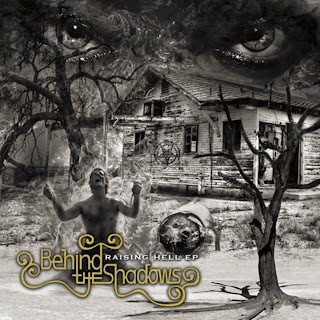 The second full-length from Greek power metallers Behind the Shadows is a rather troubling and somewhat problematic release that potentially could’ve been quite fun. The band’s basis for using tight, stylish riffing with a large influx of groove patterns makes for a decent base that comes off nicely here at times, especially alongside the faster tempos and paces from the simple-yet-pounding drum-work featured and the added symphonics on display. That said, there’s a few problems featured here in this one that does manage to hold it down. The main issue here is that the majority of the tracks are merely decent if not wholly uninteresting, tending to feature bland patterns and arrangements without much if any really exciting elements here which is due to the crippling nature of the simplistic style of the tracks. This particular genre is really keen on grandiose and bombastic patterns, and yet this here is stripped down to the point of not really featuring anything normally associated with the genre, making for a few decent moments spread out through the tracks which are more bland than anything else. That ties into the other big problem here, with the album being so short that it really can’t bring in too many other elements to spice this material up with it being so quick that there’s little opportunity it can really utilize to make up for those bland elements. It does have a few parts that work, but by and large this one isn’t all that great.

The tracks here for the most part are real hit-or-miss. Opener ‘Raising Hell’ features a simple, droning series of mid-tempo riffing with plenty of simple drumming alongside the plodding rhythms as the later kick-off into far more energetic riffing still manages to keep the somewhat plodding tempos leading into the solo section and keeping into the final half for a decent enough opener. ‘Give Me Your Soul’ uses a simple series of swirling keyboards running alongside pounding groove rhythms in the riff-work that continues along a jaunty mid-tempo series of rhythms with the simplistic driving rhythms bringing the discordant patterns into the finale for another decent effort. ‘Holy Lie’ immediately kicks into rousing groove riffing with fiery keyboards and dynamic drumming before settling on a decent mid-tempo pace with stuttering drumming and plodding rhythms churning along through the swarming riffing within the solo section and into the final half for easily the highlight of the album. ‘Zombie Flesh Eaters’ features swirling mid-tempo rhythms that quickly turns into a stylish plodding mid-tempo series of grandiose riffing and pounding energetic drumming that continually keeps a steady pace through the hard-hitting series of rhythms leading through the finale for another rather enjoyable effort. ‘The Shadow Of Death’ takes simplistic symphonic keyboards and sparse riff-work to work through a plodding pace with a series of swarming patterns that mix with the fine drumming into a more energetic pace as the energy kicks up into the final half for a decent enough effort. Finally, album-closer ‘Bloody Paradise’ uses light droning symphonics before turning into a feral series of raging riff-work and pounding, energetic drumming keeping the intensity driving along the more intense riff-work leading on through the symphonic-led final half for a somewhat decent lasting impression.

With more sizeable and noticeable flaws here to a few somewhat negligible positives really manages to stick out here for this one not being all that remarkable or truly worthwhile, leaving this one mainly only for those die-hard aficionados of the style or fans of the band’s past catalog for the most part.

Does it sound good? Order from here:
http://visionaire.bandcamp.com/album/behind-the-shadows-raising-hell
Posted by slayrrr666 at 3:55 PM