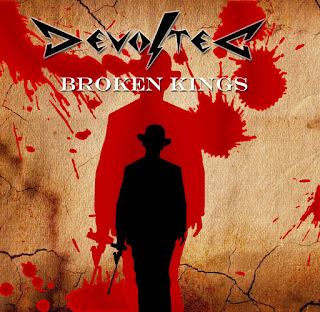 The second EP from Irish metallers Devolted offers up some rather pleasing moments here with a rather varied attack that works more often than not. Built around a mainly thrash-inspired base where they tend to get utilized more playing hard rock-styled rhythms when mixed with the rest of the rhythms on display, this builds a maddeningly inconsistent approach here where there’s a multitude of rhythms and tempos throughout each track that really stands out against the others. Going from a thumping mid-tempo hard rock outing laced alongside more hard-edged thrashing leaves a rather weird and unimpressive mixture that comes off with a rather haphazard and disjointed feel. There’s a sense of it coming together and trying to be a cohesive sound as the bands’ trying to spread their influences out here with releases like this that try to hone that out to a point, and there’s moments where this works but overall it’s still a little haphazard.

The tracks featured here aren’t all that bad and have some solid points at times. Opener ‘My Monster’ takes sharp, rattling riff-work and tight drumming that brings about a tight, sturdy mid-tempo pace with rocking rhythms along the churning grooves of the main rhythms holding the sluggish patterns along into the fiery solo section and holding on through the final half for a solid opening effort. ‘Dogs of War’ uses thumping, heavy thrashing rhythms and dynamic churning riff-work that turns into a raucous up-tempo series of riffing and dynamic drumming that holds the fiery energetic riffing along through the stuttering mid-tempo grooves churning along through the raucous finale for another rather enjoyable highlight. ‘God of Light’ features raucous rocking riff-work and plenty of charging drumming leading into the swirling rock riff-work leading along through the kick into far more energetic thrashing that merges nicely with the rocking patterns leading along throughout the final half for a decent enough effort. Lastly, the title track goes through a slow-building intro with tight, pounding drumming and rather fine riffing leading through the more up-tempo rocking rhythms with a fine series of up-tempo leads running into the pounding drumming throughout the fiery solo section and into the finale for another rather enjoyable effort that ends this on a nice note.

Though there’s a few minor stumbling blocks along the way here with it’s rather chaotic sound, there’s some really enjoyable moments here where this one gets enough working for it that it really remains a viable choice for those who want a little something different from the normal thrash worlds.

Does it sound good? Order from here:
http://devoltedband.bandcamp.com/album/broken-kings
Posted by slayrrr666 at 3:58 PM