Decrepit Soul - The Coming of War!! 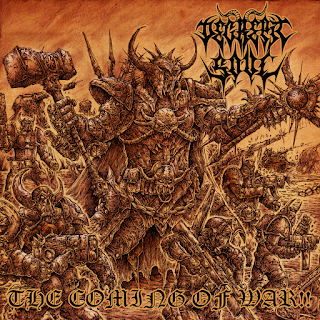 The second full-length from Aussie war metallers Decrepit Soul shows that the quick turnaround between albums isn’t a sap on their creativity but rather their general approach. This one here is still filthy, ravenous war metal which features that dirty blackened death metal approach, firing off utterly frenetic swirling tremolo riffing at such ferocious speeds it blends into a dirty buzz-like blur such is the speed they play these arrangements. Augmented really nicely with the addition of a solid mid-tempo death-metal lurch that settles very nicely into an appropriately mid-range sprawling-style patterns for what could be considered melodic interludes off-setting the tight, furious main rhythms on display which are still far more dominant on the album. With this all blazing alongside the utterly pummeling drumming that keeps this one charging along the album creates a truly dirty, blasphemous sound amidst the chaos. This one isn’t really all that varied or differential in it’s approach as there’s just so little work here with the short running time really not affording this one the opportunity to branch out or delivery some variety beyond that mid-tempo churn. Utilizing such an abbreviated set-list here doesn’t really allow for much chance to do much beyond infernal blasting, which works nicely but can make this somewhat one-dimensional at times.

The first half here sets this one up incredibly well. Opener ‘Awaken’ uses a sampled approaching-storm intro that turns into ravenous drumming and blasting, tightly-wound rhythms keeping the frenetic tremolo riffing scalding along through the savage tempo changes as the furious paces gives way to a mid-tempo sprawl leading back into the furious pounding in the final half for an impressive opening effort. ‘Feral Howling Winds’ features rattling tremolo riffing and steady drumming turning into a frantic burst of furious blasting and tight, intense rhythms carrying the swirling rhythms along into ravenous buzzing patterns leading into the swarming riff-work and intense blasting in the final half for a stellar highlight. The title track utilizes frenetic blasting drumming and swirling tremolo riffing into a frantic, intense blast full of blistering up-tempo paces carrying the buzzing tremolo riff-work alongside the blistering drumming as the screeching leads whip through the extended-noise finale for an impressive and dynamic if one-note offering. ‘Perished in Flames’ uses a slow-building intro with plenty of melodic rhythms through a fine mid-tempo buzzing riff-work leading into the tight, furious blasting and swirling tremolo rhythms firing through scalding tempos with frantic leads into the solo section and into the relaxing final half for a solid, enjoyable effort.

The second half carries the quality of this incredibly well. ‘Piscatorial Death’ takes the storm-cloud intro before gradually coming into the frantic, furious blasting with charging patterns and plenty of swirling tremolo riffing leading along through the sprawling mid-tempo sections filled with the tight rhythms along the finale for another solid track. ‘Black Goats Breath’ uses immediate blasting drumming and steady mid-tempo rhythms running along to the swirling tremolo patterns along the chaotic drumming with the frantic riffing leading through the tight leads with the buzzing patterns holding the intensity throughout the final half for a solid highlight. Lastly, album-closer ‘Storm of Steel’ features an extended melancholic intro with the change-over into tight blasting drumming and furious mid-tempo rhythms holding the tight, frantic patterns along with furious buzzing tremolo riff-work and blasting drumming running through the steady frenetic paces into the extended fade-out finale for an explosive and charging lasting impression.

Though there’s a lot to like here from a songwriting front about this effort, the fact that there’s just not a whole lot of actual songs on offer does come through and bite this one enough that it really seems more for fans of this bestial form of black/death or war metal in general.


Does it sound good? Order from here:
http://shop.ironbonehead.de/en/ibp-releases-/14751-decrepit-soul-oz-the-coming-of-war-cd.html
Posted by slayrrr666 at 4:11 PM