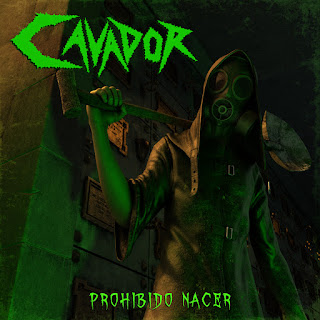 The new EP from Argentine thrashers Cavador features enough intriguing moments of old-school thrash which fits nicely into the South American variants in the genre. For the most part this here is mostly a crunchy, Bay-Area styled riff-work that rattles along with a series of sloppy arrangements which feature the type of frantic up-tempo paces that typify the kind of energetic and frantic off-the-rails thrash that’s utilized here. It’s one of the few kinds of efforts that manages to weave out far longer and winding arrangements than it really should because of that riffing style where it swirls around building up into the kind of overlong efforts here as this one really does work along quite nicely despite that rather disjointed feel. Even with that facet, the short running time here with the three original tracks and the cover simply makes that kind of riff-work all the more apparent because that’s all that appears here where the three long, winding tracks are buffered around the simple, one-note cover which sticks out here.

Overall here this one wasn’t all that bad. The opening title track works through the series of swirling rhythms into a mid-tempo series of thumping riffing alongside blasting drumming throughout the series of winding rhythms and scalding leads thrashing alongside the blasting drumming through a strong series of thumping rhythms leading to the acoustic-driven final half for a strong opening impression. ‘Campo Desolado’ takes tight, mid-tempo riffing and simplistic drumming into a steady, straightforward mid-tempo pace as the swirling rhythms carry along through plodding mid-tempo sprawling for a melodic buffer against the raging, surging solo section and carrying into the stuttering finale for an enjoyable if slightly weaker effort. Their cover of Sodom’s classic ‘Ausgebombt’ offers an incredibly faithful and enjoyable homage to the original with plenty of fiery rhythms and the same punk-ish attitude as the original yet still feels a little out-of-place as their original material is a lot more complex and involved compared to the stripped-down and simple nature of this one though it’s still remains a faithful and endearing version. Finally, ‘Prohibited Be Born’ features a tight, crunchy series of explosive riff-work and simple drumming working into a rather frenetic pace with plenty of tight, furious leads driving the raging rhythms into the surging solo section as the melodic riff-work leads into the charging finale for a strong and enjoyable lasting impression.

Despite a minor problem with it that gets a bit more pronounced over time, that isn’t a big enough factor to really overwhelm the raging energy featured here which makes for quite an appealing time here for fans of the bands’ past work or devout followers of retro-fueled South American thrash.

Does it sound good? Order it from here:
http://cavador.bandcamp.com/album/prohibido-nacer
Posted by slayrrr666 at 4:24 PM